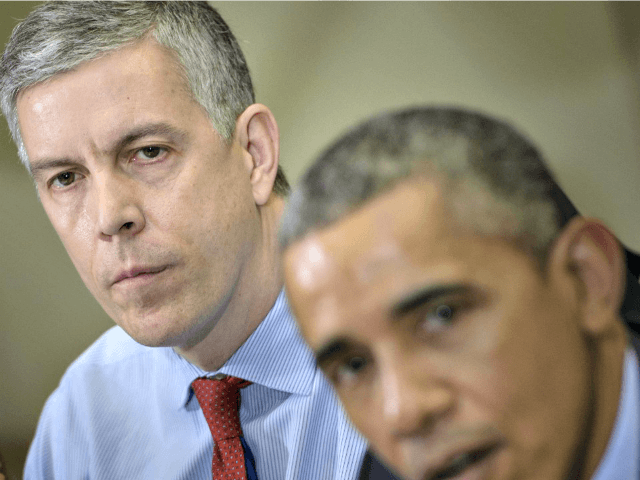 The man who spearheaded the federally incentivized Common Core State Standards initiative and referred to parents opposed to it as “white suburban moms” now says he backs “local control” of education.

According to his column at Education Week, Arne Duncan is now a supporter of local control of education because President Donald Trump tweeted, “Schools must open in the fall!!!”

The Obama-era education secretary, who served for seven years, wrote:

I have never believed in local control more than I do today, especially given the absence of leadership coming from Washington on the issue of when and how to reopen public schools safely amid COVID-19. President Donald Trump is way out of bounds when he tweets in all capital letters, “SCHOOLS MUST OPEN IN THE FALL!!!” and he’s even more off-base to be threatening to withhold federal funding if schools don’t obey him.

Electing our first black President sure didn’t hurt our country’s democracy or our rule of law.

But our violent backlash against that historic event- electing Trump- just might destroy both.

Racism continues to be the cancer in the soul of our nation that is killing us.

Duncan apparently has made a sudden shift from heading up the huge federal education bureaucracy and backing nationalized academic standards to adopting a “local control” view since Trump’s tweet Monday:

SCHOOLS MUST OPEN IN THE FALL!!!

Though, as education secretary, he was publicly criticized and called upon to resign by the nation’s largest teachers’ unions – who generally support Democrats – Duncan has never reconsidered that, perhaps, the Obama administration’s push for Common Core was a mistake.

In fact, in 2018, the former CEO of Chicago Public Schools wrote in his memoir, titled How Schools Work, that, given the chance to serve in his post over again, he would “push even harder” for Common Core.

At the same time, however, Duncan wrote in his account of his work with public schools, that the federal education system “runs on lies.”

Asked by CBS’s Face the Nation host Margaret Brennan if he “made a dent in any of that” when he was education secretary, Duncan replied, “We had some, you know, real successes. We had some failures … We’re not top 10 in anything.”

Duncan further criticized Trump, stating he is “even more off-base to be threatening to withhold federal funding if schools don’t obey him.”

However, in 2014, while serving in the Obama administration, Duncan and former Attorney General Eric Holder issued a “Dear Colleague” guidance that threatened school districts that did not show leniency in disciplinary measures toward minority students. These districts, the Democrat leaders said, could be subject to investigation by their departments, regardless of whether the student behaviors leading to the disciplinary measures were unacceptable.

“The Departments … may initiate investigations based on public reports of racial disparities in student discipline combined with other information, or as part of their regular compliance monitoring activities,” the directive stated.

Presumptive Democrat 2020 nominee Joe Biden has joined with failed candidate Bernie Sanders to create a “unity” plan that recommends a return to the same “guidance.”

In April, a study released by the Boston-based Pioneer Institute revealed a historic drop in national reading and math scores among U.S. students since the adoption of the Obama-era Common Core Standards a decade ago, while Duncan lead the education department.

“Nearly a decade after states adopted Common Core, the empirical evidence makes it clear that these national standards have yielded underwhelming results for students,” said Pioneer executive director Jim Stergios in a statement. “The proponents of this expensive, legally questionable policy initiative have much to answer for.”

While he rebuked Trump, however, Duncan touted in his column that “[t]hankfully, there is great leadership at the local level figuring out what needs to be done to open schools safely.”

Duncan wrote the “great leadership at the local level” and his “successor in D.C., John B. King Jr. began doing weekly conference calls with a dozen big-city school superintendents to talk through issues and solutions.”

“All of us outside the Beltway, I hope, also agree that safety and science will be our guide, not presidential politics,” Duncan wrote.

The former head of the federal education department continued: “The president lacks any power to order schools to open. That’s a local decision for parents, educators, administrators, and students.”

Nevertheless, when parents battling Common Core in their states argued they wanted standards produced at the “local” level, Duncan dismissed them as “white suburban moms.”