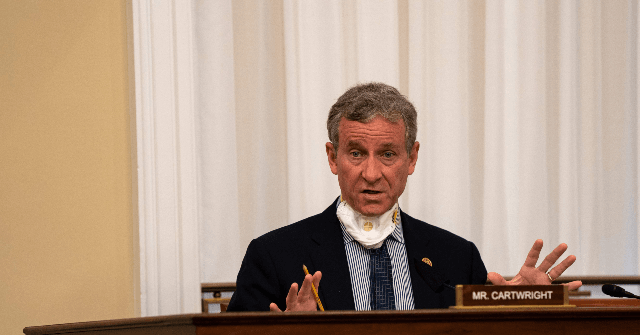 Bognet said that he sees tremendous enthusiasm throughout Pennsylvania for Republicans and the president ahead of the 2020 elections.

Bognet told Breitbart News Saturday, “You saw the Trump-Pence signs everywhere. I would walk into Turkey Hill mini-mart and talk to people; there is a lot of enthusiasm for the president. I think the mainstream media is shameful. I think they’re trying to get us to be down. I think they’re trying to push their narrative, and I think they’re going to be very surprised in the interior heartland of the country and especially when Pennsylvania comes through, when it reelects President Trump, Vice President Pence, me, and some other great Republicans when we come to November here.”

He continued, “Former Vice President Biden coming up to my district on Thursday as well, there were hundreds of Trump supporters up there and I wouldn’t say counter-protesting but showing what they thought of Biden. The Biden-Matt Cartwright Defund the Police crazy train came into town, and I cannot tell you, Matt, how angry people in northeastern Pennsylvania are at this radical agenda from the Dems. I mean Matt Cartwright, my opponent, and Joe Biden they’re both in favor of defunding the police, Cartwright said ‘Absolutely yes’ we should cut funding to the Wilkes-Barre police department, and I think they don’t understand how much that terrifies even independents and Democrats. If we don’t have law and order, we don’t have anything; we don’t have a society.”

Boyle noted that as the left continues to tear down America’s statues, Cartwright has yet to condemn the leftist mob’s move to rewrite history.

“They tried to take down our Christopher Columbus statue in Scranton, there were 200 people there, many of Italians like me to protect the statue,” said Bognet.

Bognet added that not only has Cartwright not called out the move to tear down statues, but he also said Cartwright is “cheering” for it.