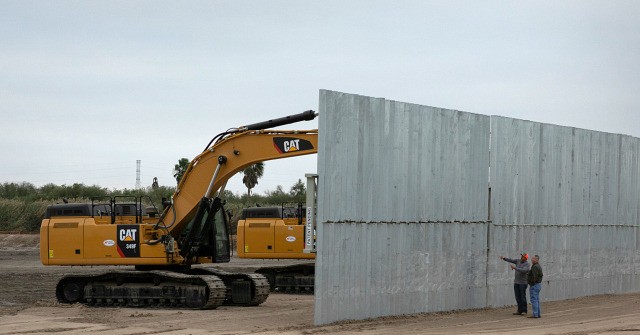 President Trump says the construction of a privately-funded border wall at the U.S.-Mexico border was done to make him “look bad.”

In a post on Sunday, Trump said he “disagreed with doing” a “very small (tiny) section of wall” by a group known as We Build the Wall, which raised at least $25 million from Americans wanting to help construct a border wall to reduce illegal immigration and drug trafficking.

A portion of the privately-funded border wall, constructed in just weeks along the Rio Grande Valley of southern Texas, is under scrutiny for its effectiveness — prompting an engineering inspection to review whether the constructed barrier is eroding.

Trump wrote in response to the news:

I disagreed with doing this very small (tiny) section of wall, in a tricky area, by a private group which raised money by ads. It was only done to make me look bad, and perhsps it now doesn’t even work. Should have been built like rest of Wall, 500 plus miles. https://t.co/L8RUPCAhqc

The International Boundary and Water Commission and the National Butterfly Center have sued over the construction of the privately-funded border wall.

Assistant U.S. Attorney Eric Paxton Warner said engineers are looking at four specific areas where erosion may be occurring and attorney for the National Butterfly Center Javier Peña alleges the erosion is significant.

Trump touted the Department of Homeland Security’s (DHS) progress on construction of border wall in contrast to the privately-funded project. According to Trump, DHS has built about 240 miles of wall since January 2017 and claimed that 450 miles would be completed by the end of the year.

We have now built 240 Miles of new Border Wall on our Southern Border. We will have over 450 Miles built by the end of the year. Have established some of the best Border Numbers ever. The Radical Left Democrats want Open Borders for anyone, including many criminals, to come in!

In January, though, Acting DHS Secretary Chad Wolf confirmed that those 450 miles of border wall includes constructed barriers and those under construction, but not fully completed.

Trump originally wanted between 500 to 550 miles of border wall completed by the end of his first term, but DHS personnel changes, waits on federal permits and contracts, and a slow start in 2017 have delayed construction.