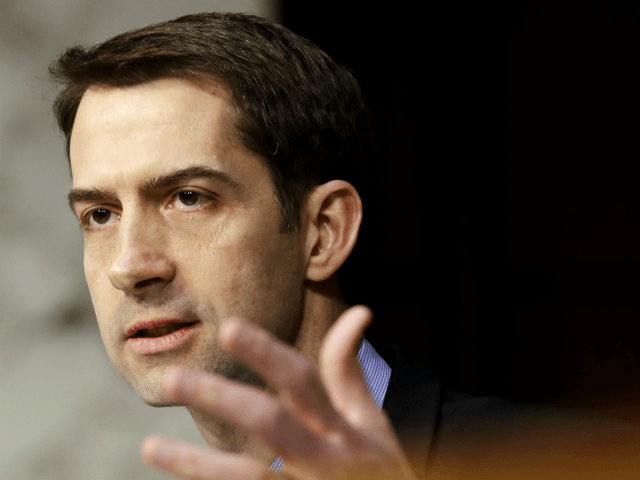 Sen. Tom Cotton (R-AR) is pressing Google CEO Sundar Pichai for answers regarding the search giant’s meddling in the U.S. presidential election after an explosive Breitbart News investigation published this week proved the company is blocking search traffic from Breitbart News and other conservative websites.

Cotton’s letter to Pichai comes after a letter he sent last week to Attorney General Bill Barr asking the Justice Department to consider potential antitrust actions against Google over its search manipulation for political and other anti-competitive purposes.

Cotton opens his letter to Pichai by referencing the letter he sent to Barr, then citing new reporting by Breitbart News about how Google has been shutting down search traffic to Breitbart News and other conservative sites — particularly anything about presumptive Democrat presidential nominee Joe Biden. Cotton told Pichai he believes the company’s actions are “misleading” the American people ahead of the election.

“As you may know, last week I sent a letter to the Department of Justice detailing concerns about Google abusing its dominance in the search engine market,” Cotton wrote to Pichai. “In that letter, I specifically mentioned concerns that conservative websites were being blacklisted from Google search results. New reporting on this very issue has compounded these concerns. Especially given the proximity to the November 2020 presidential election, the fact that Google appears to be delisting search results critical of former Vice President Joe Biden is particularly disturbing. Most Americans assume that Google shows them the most relevant results when they search the web, rather than curated results designed to support a corporation’s preferred political party. I am concerned that Google’s actions are playing a role in misleading the American people in the run-up to Election Day.”

Cotton’s letter also comes in the wake of Pichai’s testimony, alongside Facebook CEO Mark Zuckerberg, Amazon CEO Jeff Bezos, and Apple CEO Tim Cook, before an antitrust subcommittee of the House Judiciary Committee this week. During that testimony, Rep. Matt Gaetz (R-FL) pressed Pichai on an explosive Breitbart News report on an internal Google video that demonstrated senior executives plotted in the wake of President Donald Trump’s 2016 victory to ensure that Trump’s election — and everything Trump stands for — was a “blip” in history. Cotton mentions this in his letter to Pichai but then zones in on how Google’s response to this reporting denying political bias has since been proven to be untrue.

“According to leaked video from Google’s first all-hands meeting following the 2016 election, one top Google executive told employees that they must ‘work so hard’ to ensure that the populist movement that helped to propel President Trump to the White House was nothing more than a ‘blip’ in history,” Cotton wrote to Pichai. “That same executive suggested during the meeting that it is ‘incredibly valuable’ that ‘Google is a trusted source of information.’ At the time the video was leaked, Google responded to a news inquiry by saying that ‘[n]othing was said at that meeting, or any other meeting, to suggest that any political bias ever influences the way we build or operate our products,’ and that Google’s products are designed ‘with extraordinary care to be a trustworthy source of information for everyone, without regard to political viewpoint.’”

To prove these denials by Google were untrue, Cotton cited Breitbart News’s investigation published this week, which he said, “presented compelling evidence” that shows Google is “manipulating its search engine operations” to help Biden’s campaign.

“Despite Google’s previous denials of bias, it was reported this week that Google may be manipulating its search engine operations to block content appearing when users search for ‘Joe Biden,’” Cotton wrote. “A Breitbart News article presented compelling evidence indicating that, in early May, Google manipulated its algorithm to cause the ‘wholesale removal of rank and visibility’ of Breitbart results mentioning Vice President Biden. In fact, after Google’s algorithm change, the amount of Google-based impressions and clicks on Breitbart News articles for Biden-related terms stopped completely. A search engine optimization expert opined that the evidence suggested a ‘high probab[ility] [of] manipulation on the part of Google.’ Indeed, according to the article, the expert also said he had never seen anything like it. While most news websites derive 30%-50% of their online traffic from Google search results, for Breitbart News that number is only 9%.”

Cotton noted that this evidence suggests Google’s denials that conservative media are not on a “blacklist” strain credulity.

Cotton then cited Pichai’s testimony in December 2018 before Congress when Pichai said under oath that “it’s not possible for an individual employee or groups of employees to manipulate search results.”

“It is difficult to reconcile your prior comments with recent evidence,” Cotton wrote to Pichai.

So, Cotton asked Pichai to answer a number of questions he has on this matter.

“What algorithm changes did Google make in early May, and why did they de-rank or essentially eliminate Biden-related reporting on Breitbart.com from Google results for ‘Joe Biden’ or other Biden-related search terms?” Cotton asked Pichai in the first question.

The second question Cotton asked of Pichai: “Are Google’s algorithm changes tested to determine whether they filter out either conservative or liberal political views from search results prior to Google’s implementation of those algorithms?”

“Given your testimony in December 2018 that it is impossible for Google to manipulate search results to benefit one political party over another, do you believe it is mere accident that Google’s algorithm apparently disadvantages only conservative perspectives in search results in the United States?” Cotton asked in his third question to Pichai.