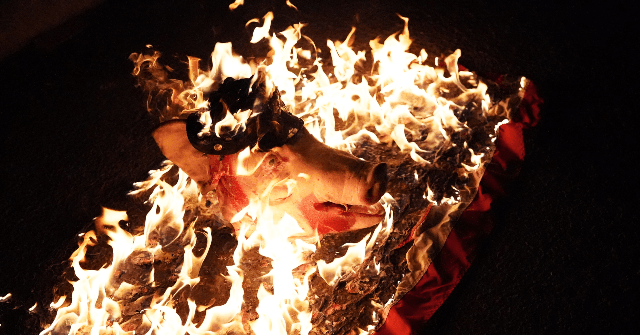 A day after Oregon Gov. Kate Brown said that state police would replace federal police to protect the federal courthouse in Portland, protesters outside the building set ablaze a severed pig’s head, donned with a cop hat, sitting on an American flag.

“Antifa protesters dumped a bloody severed pig’s head on an American flag outside the Justice Center in downtown Portland,” journalist Andy Ngo reported on Twitter. “They put a cop’s hat on it and set all of it on fire.”

Antifa protesters dumped a bloody severed pig’s head on an American flag outside the Justice Center in downtown Portland. They put a cop’s hat on it and set all of it on fire. #PortlandRiots #antifa pic.twitter.com/qfAOT4ItxP

I think we’ve had enough political grandstanding from DC. The President’s plan to “dominate” the streets of American cities has failed. And today, federal troops are preparing to leave downtown Portland. We will protect free speech and the right to protest peacefully.

Protests across the country sparked by the death of George Floyd, a black man who died at the hands of Minneapolis police on Memorial Day, have devolved into riots where properties have been burned and looted and police have been the targets of violence.

The Daily Wire reported on conflicting messages from Brown, who claimed that federal police are withdrawing, with statements from the Department of Homeland Security that said no withdrawal will take place until the agency is certain that state police can adequately protect federal properties in the city.

The state of Oregon is finally agreeing to cooperate with our federal forces–exactly what we asked for since the nightly violence broke out two months ago.

.@DHSgov will not back down from our legal duty to protect federal law enforcement officers and federal properties in the face of violent criminal behavior.

For 2 months as rioters attacked federal officers & buildings in Portland, we called on local leaders to do their job & work with us to quell violence. Finally OR is stepping up. DHS surge forces will stay until we know our officers & facilities are safe. https://t.co/vbq3Vgo0AH

The website also reported on efforts to blame President Donald Trump for violence in cities across America, and the repeated narrative in the media that protests in cities such as Portland are peaceful:

The media has noted that the level of violence decreased since the Trump administration agreed to pull federal officers back if the violence against the courthouse stopped. In its coverage of the situation, The Washington Post published a report Thursday suggesting that the deployment of federal agents to Portland was what caused much of the violence; however, the violent riots were taking place long before federal agents deployed.

U.S. Attorney Billy J. Williams, the chief federal law enforcement official in Oregon since 2015, slammed the media in a recent interview for refusing to call the violent riots “criminal.” He also criticized those who attempt to blame federal agents for the violence.

“You’re choosing terms that sort of downplay the criminal activity, and what I’m suggesting is if there is an honest accounting of what this is, that helps build the reality check for how this can stop,” Williams added. “That’s my point.”