“He needs to die,” survivor Adrianne Haslet wrote on Instagram about Tsarnaev, who was convicted and sentenced to death in 2015.

Haslet, 40, a dancer who lost a leg in the attack, was one of 17 people left without at least one limb as a result of blasts set off by bombs that Tsarnaev and his brother, Tamerlan Tsarnaev, planted as a crowd gathered near the finish line one of America’s most famous running events.

The brother was killed in a shootout with police after a manhunt.

“The death penalty should be used in this particular case,” Haslet wrote. “This terrorist admitted in court he was guilty of crimes committed against our country. He confessed. … He is a threat to all of us and he needs to die.” 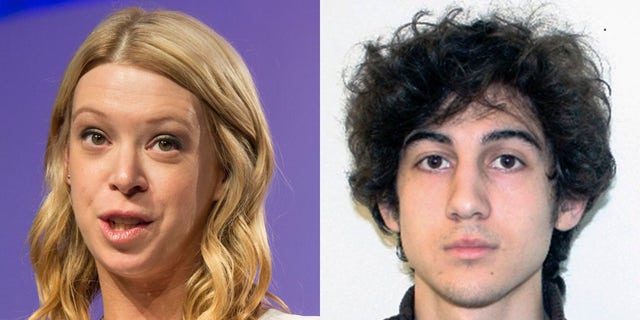 Haslet has since become an advocate for amputees, FOX affiliate Boston 25 reported.

Another attack survivor, Rebekah Gregory, wrote on Twitter that the court’s decision was “Disgusting.” Gregory, 32, a young mother, also lost a leg as a result of the attack.

“So people are sitting on death row for far less, and the US Appeals court chooses to overturn the sentence of this COWARD??!” Gregory wrote.

“All this does is give him the attention he wants, and prolongs the nightmare we have been living the last SEVEN years. Disgusting.”

Gregory has since written a book about her ordeal and made other efforts to overcome what happened to her – including running the Boston Marathon herself as an amputee, according to Boston 25.

Dic Donohue, a retired transit police sergeant who was critically wounded as law enforcement officers pursued the Tsarnaev brothers, and his wife Kim Donohue, have adopted an attitude of not allowing the attack to overtake their lives, regardless of what happens to Dzhokhar Tsarnaev.

“I’ve been expecting this since the trial and the initial appeal,” Dic Donohue wrote on Twitter about Tsarnaev’s overturned death sentence. “And in any case, he won’t be getting out and hasn’t been able to harm anyone since he was captured.”

Kim Donohue shared a photo on Twitter, showing her husband meeting with two other survivors of the bombing: Jeff Bauman, who lost two limbs in the attack, and Carlos Arredondo, a marathon spectator who was credited with helping to save lives after the bombings.

“Today’s death reversal doesn’t change me or my husband’s happiness. It doesn’t bring back our friend Sean,” Kim Donohue wrote, referring to Sean Collier, a Massachusetts Institute of Technology police officer who was killed by the Tsarnaev brothers.

“I’ve been inspired by survivors, moved to tears by doctors, and forever indebted to those who saved Dic’s life in Watertown. No sentencing will ever change that.”

Many of the charges Tsarnaev was convicted on were upheld by the appeals court, but on those death-eligible counts, the court ordered a new penalty-phase trial. So Tsarnaev could again be sentenced to death, but the government must first decide whether it wants to pursue capital punishment.

The Justice Department now has the option of asking the entire “en banc” appeals court in Boston to hear the appeal or the DOJ could ask the Supreme Court to review the case.