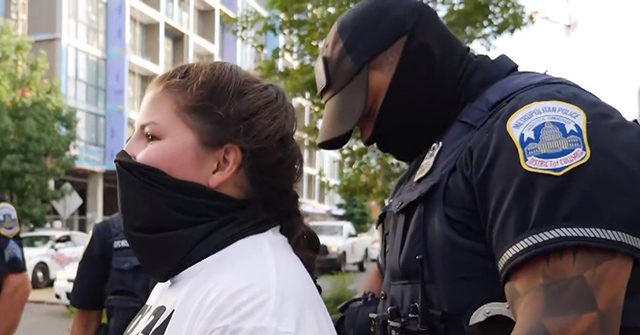 Despite the fact the students had received a permit for the event, they were arrested, said Students for Life of America (SFLA) President Kristan Hawkins.

“What you didn’t see today on the city’s streets will be coming to billboards across the country, because BLACK PREBORN LIVES MATTER, and we will not be silent,” Hawkins said in a statement. “Viewpoint discrimination is not constitutional, and we will take this to court if necessary.”

Video taken by Breitbart News shows D.C. police threatening to arrest the students in front of the Planned Parenthood facility on the 1200 block of 4th Street NE.

SFLA joined the Frederick Douglass Foundation (FDF) in a letter sent July 20, to Washington, DC, Mayor Muriel Bowser, requesting to paint the mural after the mayor permitted the phrases “Black Lives Matter” and “Defund the Police” to be painted on the street. The groups wrote:

Having opened the streets of your city for public expression, Students for Life of America (SFLA) and The Frederick Douglass Foundation (FDF) requests the opportunity to add our voices to those concerned about the treatment of people of color in America. Black Lives do matter, born and preborn, as too many people are lost in America today from causes that should be addressed and prevented for their disproportionate impact on minority communities.

You must allow SFLA and FDF to paint its “Black Pre-born Lives Matter” message. Your original decision to paint “Black Lives Matter” on the street is government speech. However, your decision to allow protestors to paint “Defund the Police” opened the streets up as a public forum. You are not permitted to discriminate on the basis of viewpoint in making determinations relating to public assemblies in public fora. The message of the preborn will not be silenced.

SFLA received a permit for the peaceful event and was asked to use tempera paint. The group said it made plans to express their grief over the loss of life in the black community from abortion.

After applying and receiving our permit for this event today, after being told by the Metropolitan police that the Mayor has quote ‘opened a Pandora’s box’ by painting public streets, we arrived to find six police cars threatening to arrest our team and students if they painted, even using the tempera paint we bought that the Police Department specifically requested. When we asked if we could at least use sidewalk chalk to chalk our anti-violence message on the streets, the police threatened to arrest us.

“With these threats D.C. Mayor Muriel Bowser has made her motives clear as she apparently only thinks that SOME Black Lives Matter and that only SOME slogans are allowed to be painted on streets,” Hawkins asserted. “She will be hearing from Students for Life’s attorneys about these unconstitutional efforts to limit speech to government-approved topics.”