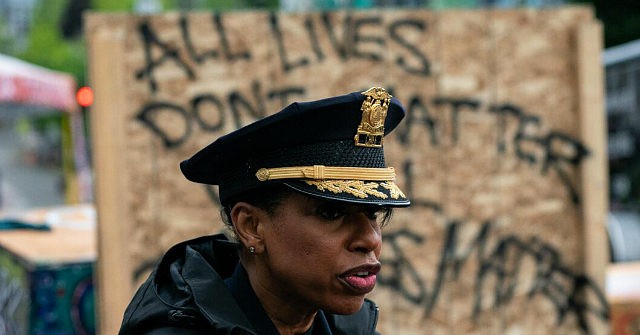 Dozens of vehicles lined the road as roughly 200 protesters, “mostly white men and women in their twenties,” gathered in the neighborhood to protest, according to the Lynwood Times. The protesters wore masks and held signs reading, “Black Lives Matter.”

The outlet reported that protesters “shouted profanity and insults at neighbors, took license plate information on vehicles, took pictures of homes, and asked little kids who lived in the neighborhood what schools they attended.”

Some demonstrators attempted to head to Best’s residence (she was not at home at the time) but were stopped by neighbors, who “established a perimeter to protect her [Best’s] home from possible mischief.”

“I feel incredibly unsafe,” one neighbor, who predicted that it will “happen again,” told the paper.

“Their objective was not completed; they never made it to her house, we stopped them … so we think they will be back,” the neighbor added.

Another resident detailed the nature of the protesters to the outlet, describing them as “very organized.”

“They had radios, talking to each other. They had numbers they used to decal all their cars for who knows what. So, they were identifying all their vehicles individually by number. They came with a mission. … They were out here intimidating us,” the individual said, according to the Lynwood Times.

“My neighbors were concerned by such a large group, but they were successful in ensuring the crowd was not able to trespass or engage in other illegal behavior in the area, despite repeated attempts to do so,” Best wrote in an August 2 letter to the Seattle City Council.

Best told the council that the local police sheriff is “monitoring the situation,” which Snohomish County Sheriff Adam Fortney affirmed in a statement to the Lynwood Times.

“I assured her [Best] that the Snohomish County Sheriff’s Office would deploy whatever resources were necessary to protect her, her family, and her property,” Fortney said.

Best, in the letter, urged the council to “stand up for what is right” and condemn the actions of such demonstrators.

These direct actions against elected officials, and especially civil servants like myself, are out of line with and go against every democratic principle that guides our nation. Before this devolves into the new way of doing business by mob rule here in Seattle, and across the nation, elected officials like you must forcefully call for the end of these tactics.

The events of this summer were initiated in a moment of grief and outrage over the murder of George Floyd by Minneapolis police officers and so many other Black and Brown people suffering at the hands of injustice. All of us must ensure that this righteous cause is not lost in the confusion of so many protestors now engaging in violence and intimidation, which many are not speaking against.

Best has been upfront in acknowledging the reality of violent protesters at many of these nationwide Black Lives Matter protests. Last week, she announced that police seized a van — which was present at the city’s July 25 protest — filled with weapons, including explosives.

Best said the vehicle was “impounded” and a judge granted detectives a search warrant. Investigators discovered “one pyrotechnic explosives [sic], smoke bombs bundled together — and lit and unlit but able to cause large amounts of smoke that are caustic to humans — bear spray — using it on anything but bears is a federal offense — pepper spray, stun guns, [and] improvised spike strips,” she said.

Best reminded reporters that 59 officers were injured as a result of the violent riots, and added that the evidence demonstrates that “not everyone that comes to these protests is peaceful.”

At the time, Best acknowledged that some protests and protesters have remained peaceful but emphasized that peaceful protesters “do not show up with a van full of bear spray, stun guns, spike strips, and explosives.”

Best said the initial proposal — to slash police department funding by 50 percent — would “decimate public safety for the city of Seattle.”

“And the real tragedy of doing that is that we will lose 1,100 employees. That’s 50 percent of our total workforce,” she said during a July appearance on KTTH’s Jason Rantz Show.

“Because most of our budget is made up of our personnel costs, and it would be a tragedy,” she added. “I think that it’s the height of recklessness for them to decimate public safety for the city of Seattle without being thoughtful and encouraging public engagement on this issue.”