British Prime Minister Boris Johnson says it is a “moral duty” to reopen schools despite the coronavirus pandemic, in a column written for the Daily Mail.

Johnson has found himself in a difficult situation after Dr. Mary Bousted, head of the National Education Union, urged schools to ignore “threatening noises” from the government and refuse to reopen until the institutions feel safe, the Telegraph reported.

US TOPS 5 MILLION CORONAVIRUS CASES, CONTINUES TO LEAD WORLD IN INFECTIONS AND DEATHS

“The latest iteration of government guidance is so unworkable that you can’t trust it,” Bousted said in a Zoom interview with the Telegraph. “Local authorities and schools should take the confidence to do what they can do and that will mean for many schools that they cannot have all children fully back in September.” 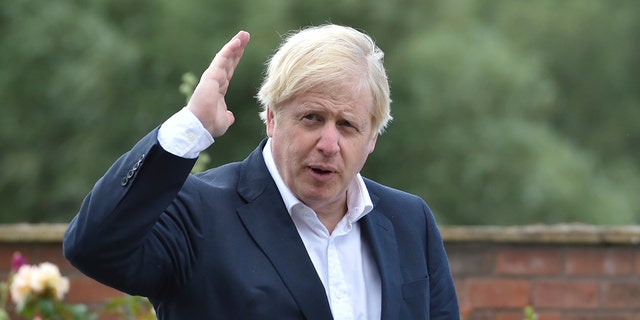 British Prime Minister Boris Johnson speaks to local people at the Canal Side Heritage Centre in Beeston on July 28, 2020, in Beeston near Nottingham, England. The government is launching a new cycling intuitive to help get people fitter. (Photo by Rui Vieira – WPA Pool/Getty Images)

“Now, the government’s making threatening noises about that. But in the end, they won’t be able to carry out their threats.”

In a lengthy rebuke, Johnson laid out an argument for pushing for schools to open, saying that a failure to do so is “socially intolerable, economically unsustainable and morally indefensible.” In his Daily Mail article, Johnson cited a decline in the number of infections, which have fallen from an estimated 157,000 in early May to around 28,000 at the start of August.

“This pandemic isn’t over, and the last thing any of us can afford to do is become complacent,” Johnson wrote. “But now that we know enough to reopen schools to all pupils safely, we have a moral duty to do so. Because there is ultimately no substitute for a child learning at school to give them the knowledge, skills and wherewithal to succeed in life.”

Johnson argued that the move to remote learning heavily favored the children of wealthy families, with those children spending over 75 minutes more per day on home-schooling than those of poorer families. He further claimed that one study predicted that the attainment gap between students could widen even more.

The Daily Mail claimed that “there has not been a single case of a pupil infecting a teacher with the virus anywhere in the world,” though the paper noted that a modeling forecast published in The Lancet Child & Adolescent Health warned that opening schools across the UK in September could lead to a tsunami of new cases, more than twice the size of the first wave.

A second study showed virtually no transmission from students to teachers, but Professor Mark Woolhouse, head of infectious disease epidemiology at Edinburgh University, said, “The fact that there aren’t any that we can find, and there still aren’t, doesn’t mean that it’s not possible in principle and doesn’t mean that it won’t happen on occasion.”

“Even if this virus doesn’t spread easily among the children, it certainly will spread among staff if it gets the opportunity … The evidence so far is that the most dangerous room in the school is not the classroom, it’s the staff room. So schools need to pay attention to that, and not take their eye off the right ball.”