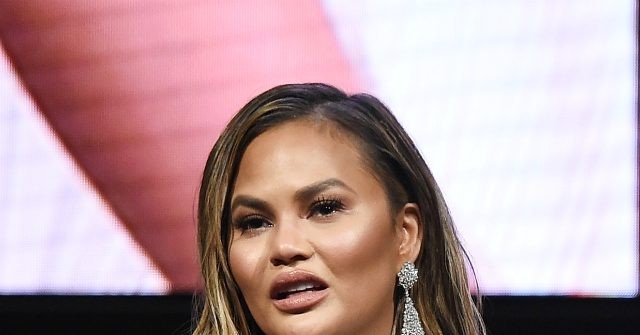 Chrissy Teigen was one of the first celebrities to say she was done with Goya products after the company’s CEO praised President Donald Trump during a White House ceremony in July. Now the model-influencer is being mocked as a hypocrite after a can of Goya beans was spotted in her Instagram feed.

Teigen posted a cooking lesson for oxtail stew to her Instagram Story account on Thursday. In one of her photos, a can of Goya pigeon peas can be seen in the background, alongside a can of Grace coconut milk and a bottle of Lea & Perrins Worcestershire Sauce.

Teigen tweeted last month that she was through with Goya products after Goya CEO Robert Unanue spoke during a Rose Garden event where President Trump signed an executive order on his Hispanic Prosperity Initiative. “We’re so blessed to have you as our leader, as we continue to build this country and make it the most prosperous nation in the world,” Unanue said.

His words of praise for President Trump clearly enraged Teigen, who swore she would stop using Goya food. “FUUUUUUUCK. A shame. Don’t care how good the beans taste though. Bye bye,” she tweeted.

Teigen also slammed Ivanka Trump over a humorous tweet in which the first daughter posed with a can of Goya beans. “Is this even ethically ok or legal??” Teigen tweeted.

The Goya sighting in her Instagram feed has prompted online mockery, with social media users pointing out the star’s hypocrisy.

@chrissyteigen biggest hypocrite.😑 Why tho? pic.twitter.com/EnoTSeXNzk

Hypocrite. This was 11hrs ago. pic.twitter.com/sk8Bt8QYaN

Remember when Chrissy Teigen was screaming from the rooftops to boycott Goya? And then last night made a recipe with Goya beans? Lol I love a hypocrite.

It’s 4 am and I still can’t stand Chrissy .. All that hype about canceling Goya yet you’re using it lol pic.twitter.com/13jISZQKdv