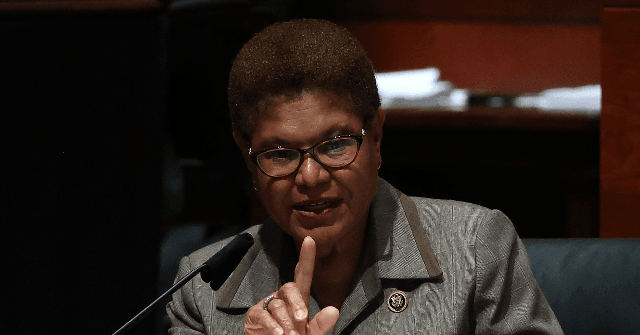 Mansour said Bass is “a dedicated Marxist-Leninist, at least she was at one time and she hasn’t really disavowed that,” until Bass began the vetting process to be Biden’s running mate.

But Bass’s participation in Venceremos Brigade, a communist front group founded by Cuban dictator Fidel Castro and controlled by the Cuban intelligence service, and her eight trips to communist Cuba in the 1970s “paints a much more complicated picture,” Mansour said.

Mansour noted Bass was identified at by contemporaneous accounts as being the leader of the Los Angeles contingent of the Venceremos Brigade, and cited Congressional hearings and FBI reports about the Brigade based on testimony from high-ranking Cuban intelligence officials who defected to the United States. These officials testified that Cuba’s General Directorate of Intelligence (DGI), the country’s equivalent of the CIA, carefully selected and vetted the members of the Venceremos Brigade, particularly the leaders.

“The intelligence officers of the Cuban regime were very careful in picking their leaders and members of this because they saw them as assets,” she said.

Mansour added the reason individuals were selected for leadership was for “long term influence.”

An undercover law enforcement officer who tried to infiltrate the Brigade said members of the Brigade had to be “a confirmed Marxist-Leninist,” and attend 3 and a half months of semiweekly “indoctrination seminars.”

“You had to be a dedicated person to be a member of the Venceremos Brigade,” Mansour said.

Politico reported on Friday that over 300 DNC delegates and members are urging Biden to pick Bass as his running mate, calling her the “unity” candidate.

Mansour believes Cuba will have gotten what they want with Bass one heartbeat from the American presidency and that the Cuban regime’s years of cultivating American leftists such as Bass allowed the communist dictatorship to achieve its goal of normalized relations with the United States in 2015.

A monologue on Bass and her past starts at about 5:00: