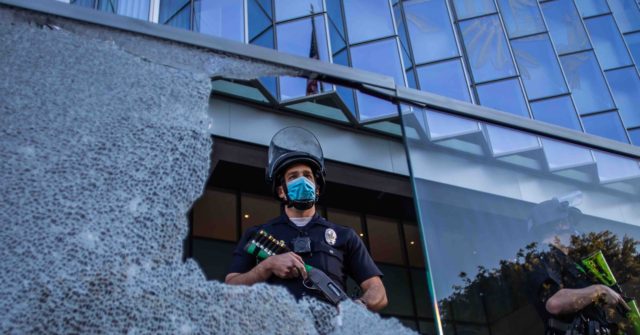 A Los Angeles councilman who voted to cut the city’s police budget by $150 million allegedly called police to his home several times since April.

Fox 11 reporter Bill Melugin tweeted a link Friday to a public information records request that reportedly showed Councilman Mike Bonin “called LAPD to his home 8 times since 4/4/20, including to provide extra patrols and protection from peaceful protesters at his house”:

A public records request reveals that LA city councilman Mike Bonin, who voted to defund LAPD by $150 million, has called LAPD to his home 8 times since 4/4/20, including to provide extra patrols and protection from peaceful protesters at his house. https://t.co/Z6yhJ8XKM4

In a subsequent tweet, Melugin said it was not him who filed the request, but someone else:

***I do not deserve any credit for this*** someone else filed this records request and once it is fulfilled, LAPD posts it publicly and it becomes publicly available info. The request does not say who filed it, but props to whoever did it!

Bonin, whose website described him as a “Progressive Problem-Solver,” later denied the accusations and said he had never asked officers to patrol his home:

No, Bill, this is as false as the tampon story you broke. I have NEVER asked LAPD for patrols at my house. https://t.co/32ZZbSVTQL

Following Bonin’s denial, Melugin tweeted that “Multiple LAPD sources say they would not generate their own calls for a simple patrol”:

Councilman Bonin denies calling ever LAPD to his home in this thread. https://t.co/BwJKH35ZOd
Multiple LAPD sources say they would not generate their own calls for a simple patrol. High level LAPD source texted me the following in response to Bonin’s claims. https://t.co/Q8I9mwezyl pic.twitter.com/HxozplLoc0

In a Twitter thread, Bonin claimed when protesters showed up to his house, “I specifically asked LAPD NOT to send anyone.”

Seven of the eight calls you cite were apparently generated by LAPD themselves, sending patrols without my request and often without my knowledge.

The only time LAPD has come at my request was to pick up as evidence the syringes that one of the right-wing protesters left on our doorsteps.

“This is a cute tactic to try to silence or intimidate a public official who is standing up to the police union. It ain’t working,” Bonin concluded.

The Los Angeles City Council voted in June to study ways to cut the LAPD’s budget by $100 million to $150 million, according to ABC 7.

The council voted 11-3 with Councilmen Paul Koretz, Joe Buscaino and John Lee dissenting. Although community activists presented their idea for more dramatic reductions in law enforcement spending, the city’s Budget and Finance Committee sent the proposal to the full council.

The People’s Budget LA proposal was developed by a coalition of organizations led by Black Lives Matter’s Los Angeles chapter, and it seeks to have the LAPD’s proposed budget cut by 90%, with the funds allocated to social services, such as mental health and housing. LAPD’s proposed operating budget for the next fiscal year is about $1.86 billion.

“I think we owe it to Los Angeles to come up with a better and a smarter way of doing public safety and emergency response, and I think this motion is the first step in doing that,” Bonin said at the time.

“It’s not about random slashing and cuts. It’s about re-prioritizing and … to invest in neighborhood safety, and there’s ways to do that,” he concluded.