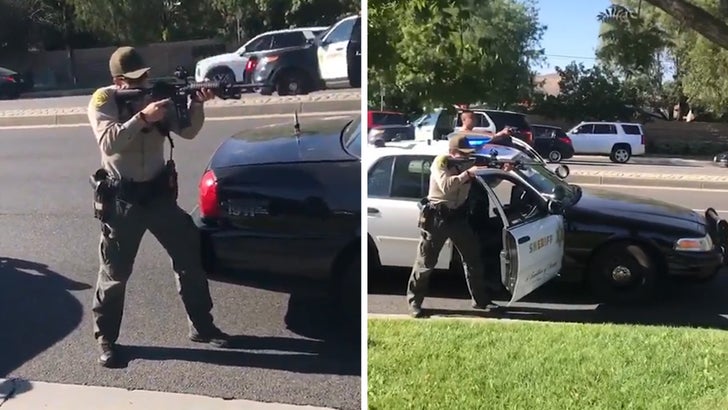 The L.A. County Sheriffs are under fire again after pointing guns at three black teens who actually needed their help following several 911 calls.

The incident went down in Santa Clarita, about 35 miles north of L.A., and you see in the video a bunch of deputies roll up as several other deputies are already pointing high-powered weapons at the teens, who have their hands up.

Police in Santa Clarita point their guns & arrest the teenagers who needed their help pic.twitter.com/GPjQo80ICd

Tammi Collins, the mother of one of the teens, says her son and a couple of friends were sitting at a bus stop when a homeless man asked if they had any crack and then tried to steal their stuff. She says the man became super aggro, ripped his shirt off and pulled a knife on them, and attempted to stab them.  She says the kids fended the man off with their skateboards.

Tammi says several 911 calls were placed and all but one claimed the boys were the victims, but one caller, she says, told the dispatcher “two black guys were attacking a homeless man.”

The deputies have their weapons trained on the teens, as bystanders explained they were the victims, but the cops were unmoved. It’s unclear if the teens were placed under arrest. We have no idea if the cops detained the homeless man, or if he was even around when they arrived.

We reached out to the L.A. County Sheriff’s Dept. … so far, no word back.