Britons are locked in a frantic final dash to take advantage of the Eat Out to Help Out deal on its final day – as Rishi Sunak ruled out extending the promotion but Wetherspoons vowed to launch its own discount programme.

Diners joked it was ‘food binge day’ and they would try to ‘eat as much as possible’ to make the most of the scheme, which has seen the government pay 50% of the bill up to £10 per head at participating restaurants from Monday to Wednesday.

In Winchester, cafe-goers were forced to queue for three hours to get a table so they could use the discount, which has been dubbed ‘Rishi’s Dishes’.

One bargain-hunter, Brandon Reis, 25, told MailOnline: ‘The opportunity to make savings like this may never come again, so I’ve been eating out two to three times a week.’

The Chancellor said more than 64million meals had been claimed since the initiative was launched at the beginning of August.

Reports that it could be extended to help hard-pressed city centres were today dismissed by a senior Treasury source, who told MailOnline: ‘We love it as much as everyone else but Rishi is very clear about hard stops.’

Meanwhile, pub operator JD Wetherspoon has said it will fund discounts on meals from Monday to Wednesday until at least November 11, describing the scheme as a ‘great boost’ to the hospitality industry.

The programme was part of an attempt to boost the hospitality industry in the wake of the coronavirus outbreak and help hard-pressed town centres.

Scroll down for video. 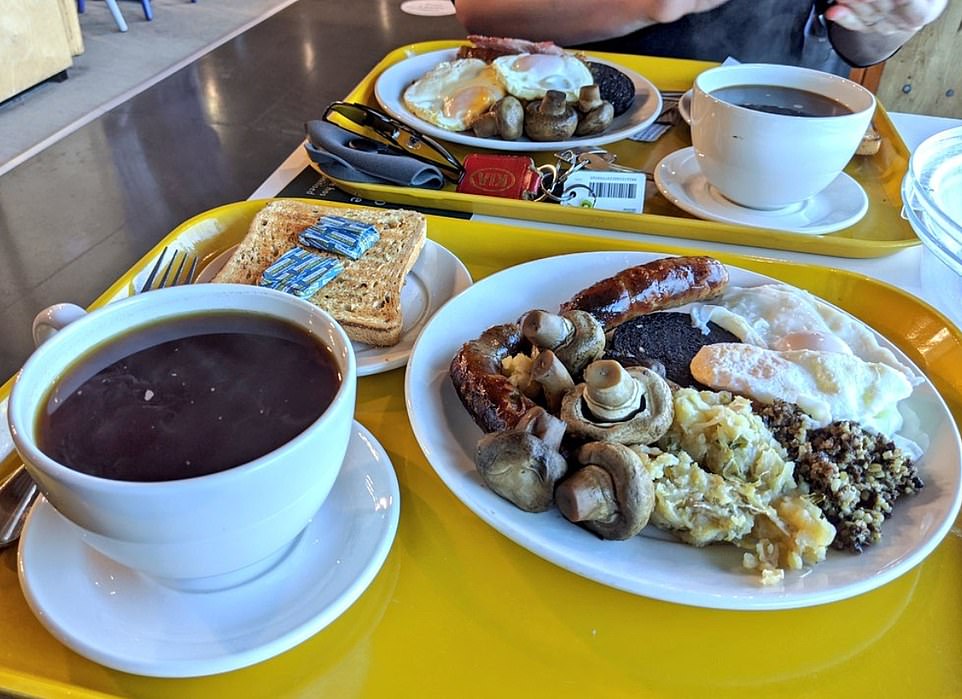 Twitter user Vicky Osgood enjoyed a nine-item breakfast at Gloucester Services, including bubble and squeak and haggis, plus a coffee for £6.20. She tweeted: ‘Probably our last #EatOutToHelpOut meal, but we’ve finished on a cracker’ 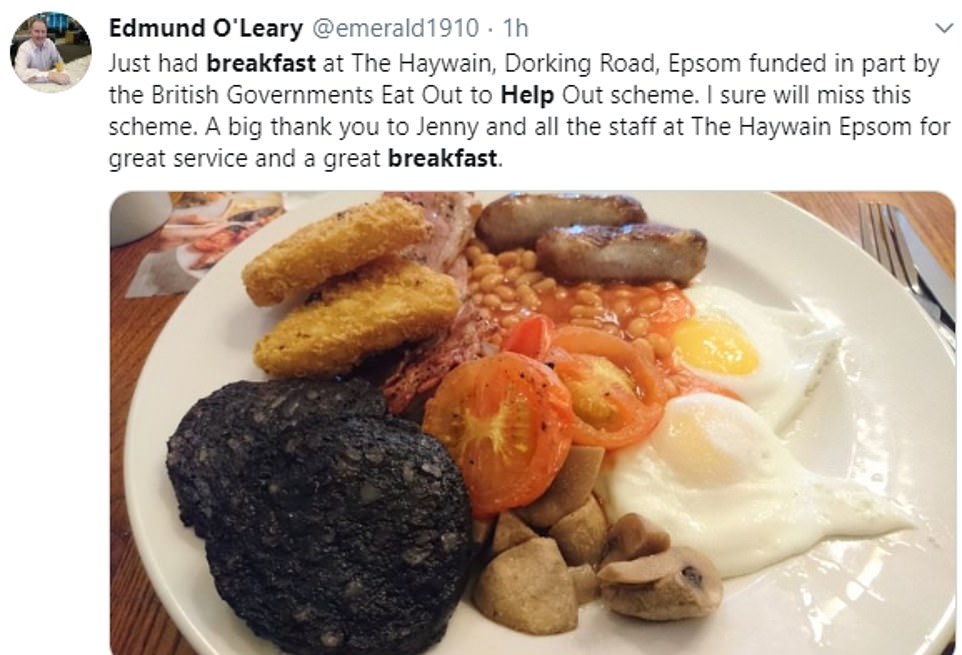 Twitter user Edmund O’Leary enjoyed a bumper All English Breakfast at the Hay Wain in Epson, which he thanked for offering ‘great service’ 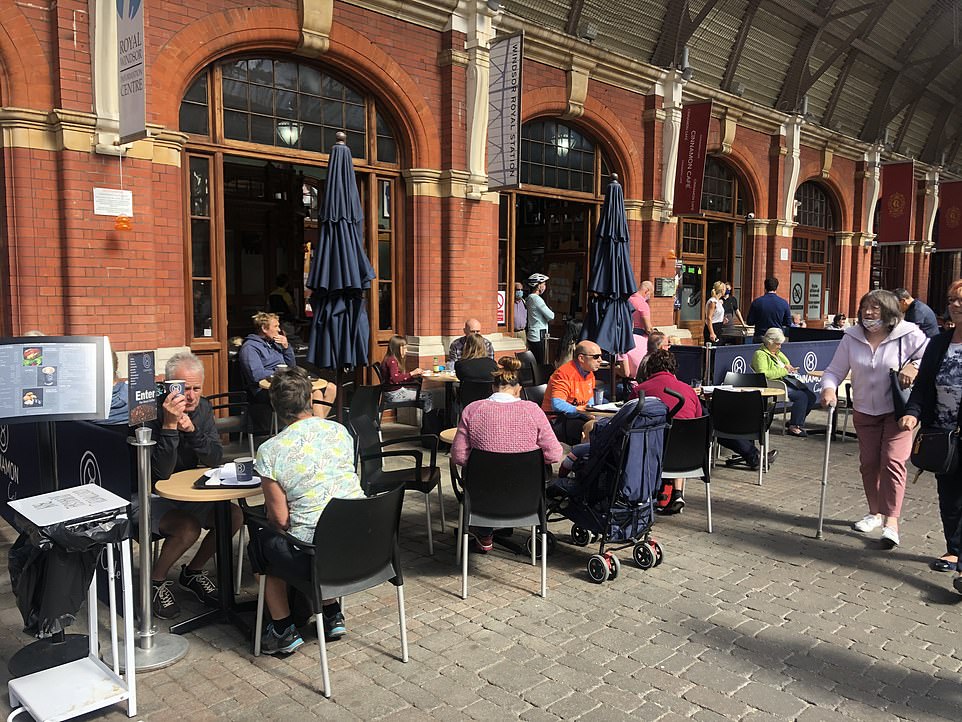 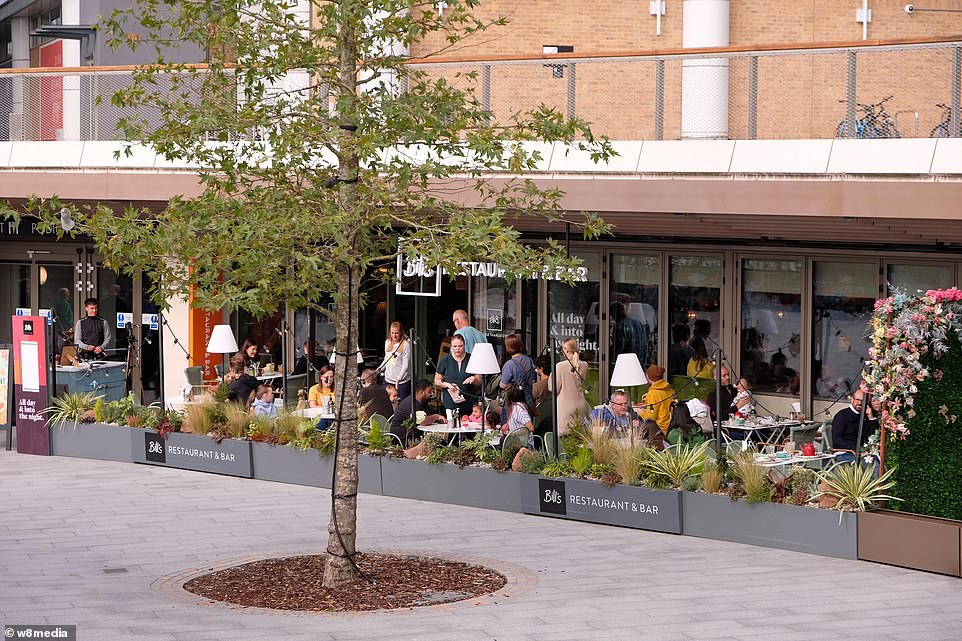 Bills in Southampton was full of diners using the discount today, with outdoor tables making it easier to manage the crowds

Every table was full today at Josie’s, which is one of the most popular cafés in Winchester.

Jackie Reis had taken her children Jessica, 19, a waitress, and accountant Brendon, 25, out for brunch with their partners.

‘I’ve just got back from Portugal and I’ve never felt safer,’ she said. ‘I felt safe over there and I feel safe here. I’ve been avoiding big gatherings of people, but I’m just looking forward to things going back to normal.’

A last roll of the dice? Chains continuing the Eat Out to Help Out scheme with their own money

Her son, Brendon, agreed. ‘I’ve been going out a lot more since Eat Out To Help Out was introduced,’ he said. ‘I’ve ending up spending way more than I would otherwise. It’s like when a shop has a sale and you buy loads of things you never knew you needed.

‘The opportunity to make savings like this may never come again, so I’ve been eating out two to three times a week. The scheme has definitely worked.’

His partner, 24-year-old Zoe Martin, a primary school teacher, agreed. ‘The fear is all behind us now,’ she said. ‘We’re all just looking forward to a bit of normality when school starts again next week.’

Waitress Jessica Reis, who was on her day off with her family, said that the opportunity to save had changed her habits. ‘Before Covid, I used to go out a couple of times a month. Now it’s a weekly occurrence,’ she said.

Her partner, Rob King, 19, who works in a garage in Eastleigh, added that the discount had ‘given everyone the confidence we need to get the economy moving’.

‘Everyone wants to make the most of it,’ he said. ‘There was a slight anxiety at first, after emerging from lockdown, but we soon shrugged that off.

‘With the safety measures in place everywhere, we don’t feel in any danger and things are pretty much back to normal. But that could all change if there was a sudden increase in cases.’

But the Government’s discount scheme had not motivated everyone. Hannah Busby, 25, and her sister Emily, 22, were standing outside the café trying to decide whether it was worth waiting three hours for a table.

‘We were expecting it to be busy, but not like this,’ Hannah said. ‘To be honest, we’ve only come out because it’s a Bank Holiday. Saving ten quid is neither here nor there.’

Emily added: ‘The savings haven’t made a difference throughout. We didn’t normally go out from Monday to Wednesday, and we don’t now either. It’s only due to the Bank Holiday that we’re here.’

Their friend, bricklayer Craig Caisley, 24, agreed. ‘People are motivated to get out into town after the lockdown anyway,’ he said. ‘It’s not really about the money.’

Solicitor Sarah Campbell, 29, was standing next to them in the queue while she waited for a friend. ‘The weather has also played a factor,’ she said.

‘I live in a flat, so when it was sunny I went out to beer gardens a lot, as I don’t work on Tuesdays and Thursdays.

‘The discount was nice but it wasn’t a dealbreaker. I think it did give a lot of people confidence, though. And heaven knows we need it at the moment.’ 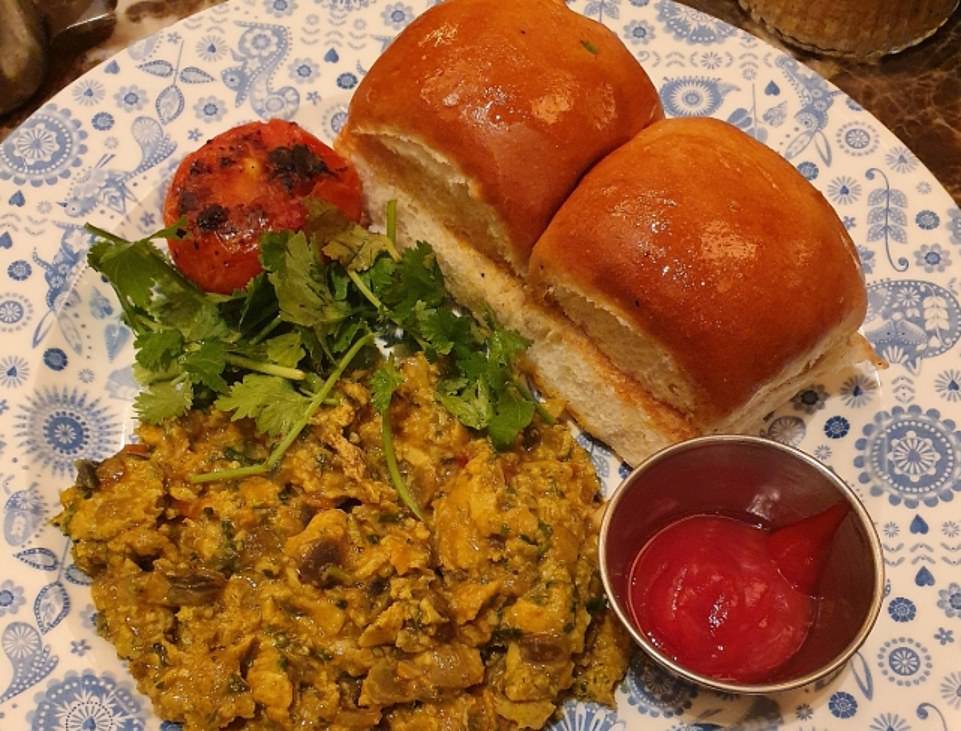 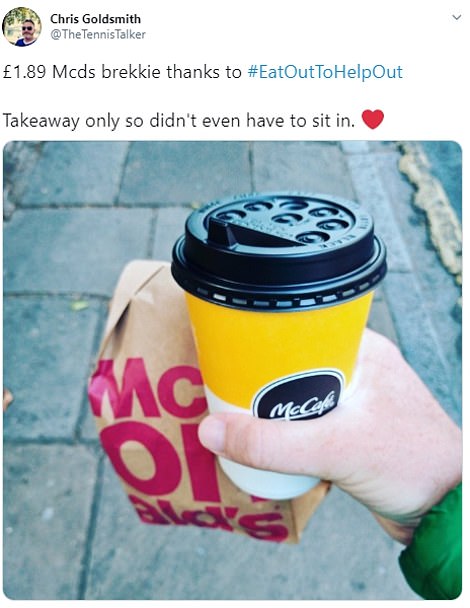 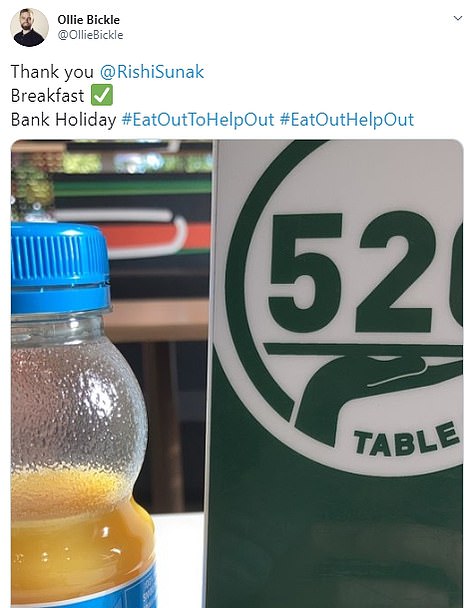 Diners celebrated their meal deals today as they made the most of the scheme before it ended, including Chris Goldsmith who visited McDonalds 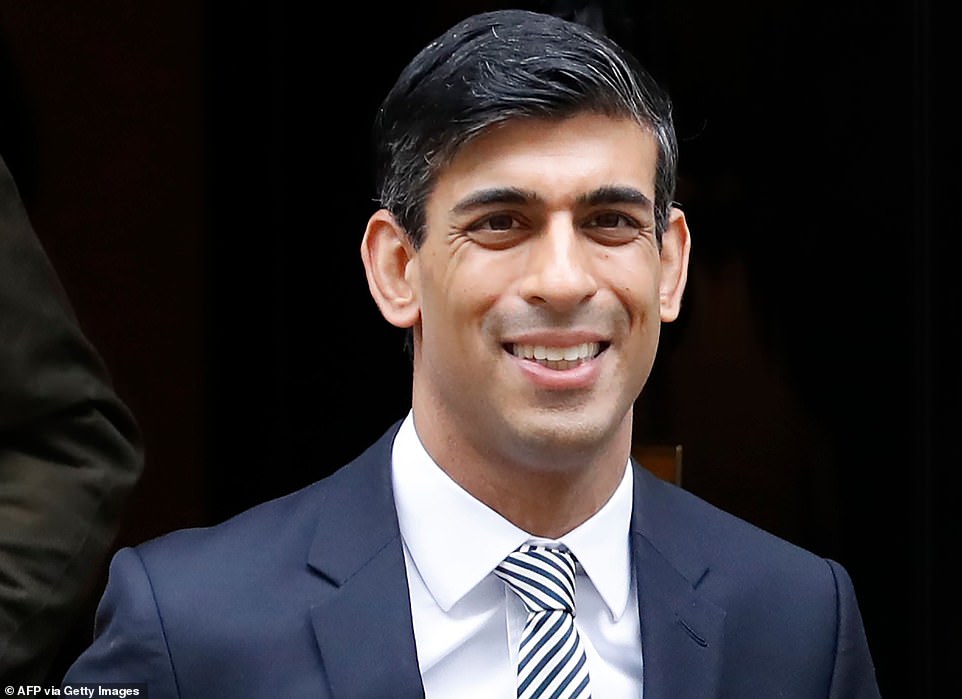 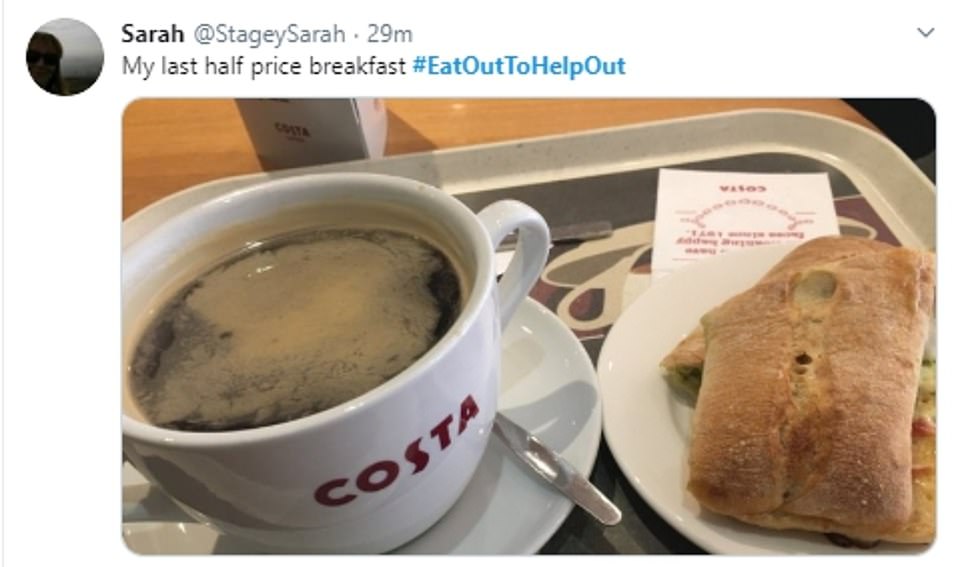 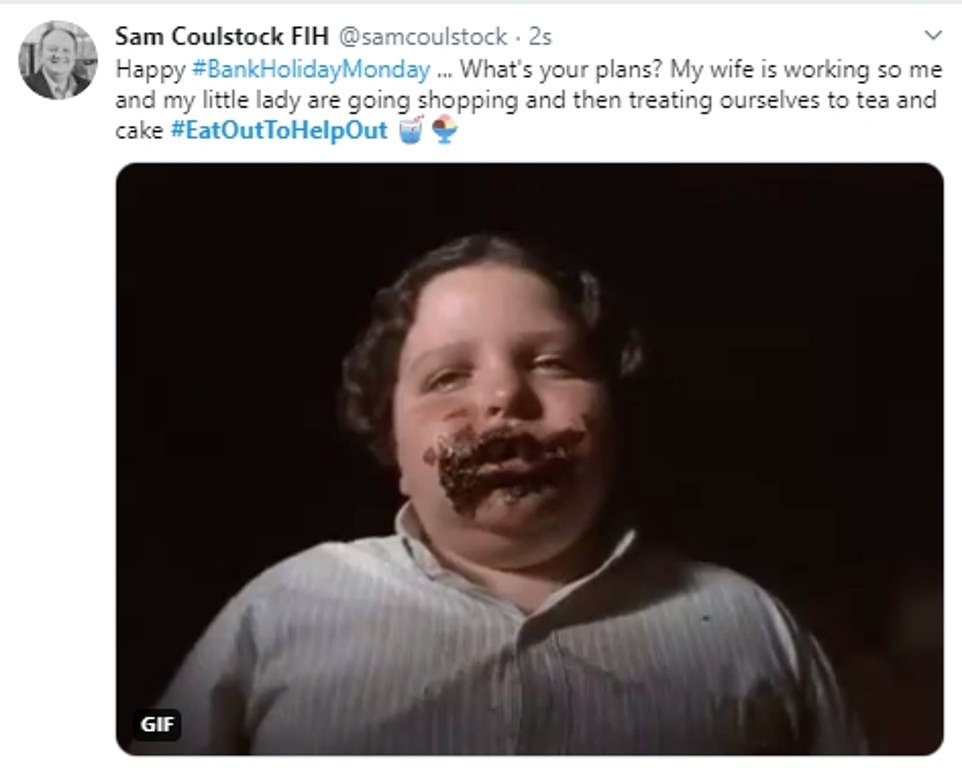 Wetherspoon’s plans to keep discounts after Eat Out scheme ends

Pub operator JD Wetherspoon is launching its own reduced prices scheme after the end of the Government’s Eat Out to Help Out initiative.

The move will see prices on a range of meals and drinks reduced from Monday to Wednesday until November 11.

The cheaper prices will start on Tuesday, following the end of the Government’s drive to encourage people to eat out by subsidising meals during August.

Wetherspoon said prices on some of its meals and drinks will be cheaper than those available in takeaways.

Chairman Tim Martin said: ‘The Government’s Eat Out to Help Out scheme was extremely popular with our customers and a great boost to the hospitality industry.

‘We are keen to offer our customers a superb choice of food and drink at great value for money prices.

‘Our offer means that a classic beef burger in our pubs will be even better value than McDonald’s.’

Announcing the end of the scheme, Mr Sunak said: ‘As the Eat Out to Help Out scheme draws to a close, I want to say thank you to the diners who have fallen back in love with their local.

‘To the managers who have spent weeks ensuring their restaurants were safe and to the chefs, waiters and waitresses across the country who have worked tirelessly, sometimes with more customers than they’ve ever had before – all helping to protect 1.8 million jobs in the hospitality sector.

‘The scheme reminded us why we as a nation love dining out and I urge diners to maintain the momentum to help continue our economic recovery.’

The idea of keeping the scheme going was said to be a matter of live discussion within the Treasury.

Chancellor is warned not to hammer middle classes on fuel, capital gains and pensions to pay off coronavirus bill

Senior Tories last night urged Rishi Sunak to abandon plans for a £30billion tax grab over fears it could throttle an economic recovery.

The Chancellor is said to be considering a huge fiscal raid in this autumn’s Budget to plug the gaping hole in public finances after record spending on coronavirus.

Many of the proposals would hammer the middle classes and better-off.

Fuel duty, capital gains tax, corporation tax, the pension triple lock and pension tax relief are all said to be in the firing line

The proposals are reported to have been drawn up by Treasury officials as ‘options’ for ministers in the Budget, which is pencilled in for November.

No decisions have yet been taken by ministers about how to deal with a deficit expected to top £300billion this year.

But one Cabinet minister said the Chancellor would face a revolt if he pressed ahead with the tax grab.

‘Tax rises of this sort would be the worst possible economic policy to adopt right now,’ the minister said.

‘It would guarantee a much deeper recession. Large parts of the economy are still fragile – we need to nurture it, not throttle it.’

One minister told The Daily Telegraph: ‘The scheme has been a big success in general, but it’s all very well going to your local restaurant down the road for a cheap meal when those restaurants are already doing good business because of people working from home.

‘It is the destination restaurants in city centres that need the help, and that’s where resources should be concentrated.’

But a Treasury source has now ruled this out.

A number of chains and establishments have said they will continue the practice into September despite Government financial support being withdrawn.

Wetherspoon’s said prices on a range of meals and drinks will be reduced from Monday to Wednesday until November 11.

The cheaper prices will start on Tuesday, following the end of the Government’s drive to encourage people to eat out by subsidising meals during August.

Wetherspoon said prices on some of its meals and drinks will be cheaper than those available in takeaways.

Chairman Tim Martin said: ‘The Government’s Eat Out to Help Out scheme was extremely popular with our customers and a great boost to the hospitality industry.

‘We are keen to offer our customers a superb choice of food and drink at great value for money prices.

‘Our offer means that a classic beef burger in our pubs will be even better value than McDonald’s.’

Jemima Ferguson, marketing director at itsu, said: ‘The scheme has been hugely successful for us at itsu.

‘It’s helped to drive over 50% more transactions during the Eat Out to Help Out period each week, without negatively impacting our trade during the rest of the week.

‘We believe ripple effects from the positive impact of this scheme will be felt for many months to come.’

Meg Ellis, of Honest Burgers, said: ‘We’ve been really encouraged by the shift in energy in our sector as a result of the Eat Out to Help Out scheme.

‘We’ve been able to bring more people back into work as a result of the scheme, which they have really enjoyed, and for some of our friends operating independently in the sector this has been the opportunity to confidently re-open for the first time.

‘Seeing the vitality coming back into their restaurants has been a joy to witness.’

The boss of the Greene King pub chain told the BBC that that city centre sites were still struggling, especially in London, despite some of its 3,100 sites seeing a significant boost in sales.

‘It is a false bubble so we’re not getting too excited, but Monday, Tuesday and Wednesday are up probably 100% [on last year]. The week’s up 50%. Thursday has pivoted – it’s the new Monday.’

The Chancellor is being urged to continue the scheme from within the Government, reports indicate. 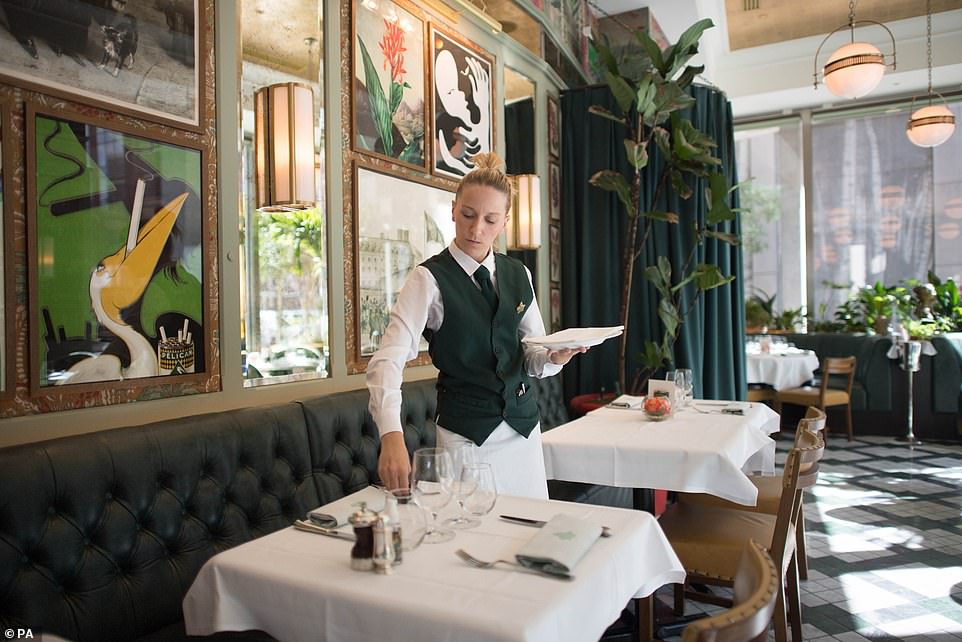 Staff at The Ivy Victoria in London, prepare the dining area as the government initiative Eat Out to Help Out comes to an end