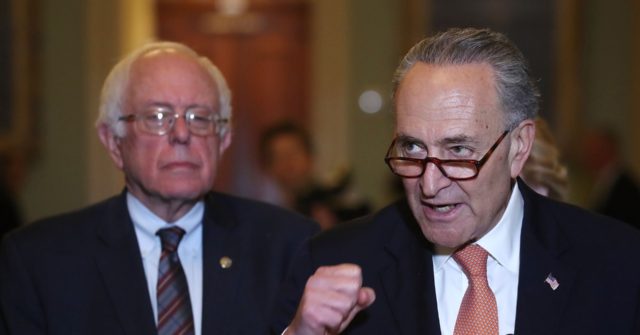 Senate Minority Leader Chuck Schumer (D-NY) tweeted an article from Politico in which Sen. Bernie Sanders (I-VT) said that America needed to plan for President Donald Trump’s refusal to leave office, under the assumption he loses the election.

Schumer added approvingly: “This is important: I’m standing side-by-side with @SenSanders to make sure we have a plan if President Trump refuses to leave office.”

This is important: I’m standing side-by-side with @SenSanders to make sure we have a plan if President Trump refuses to leave office.https://t.co/WaV86rcoU2

President Trump has already said that he would leave office and go on to do “other things” if he lost the election. Yet his opponents have spun a conspiracy theory in which he would refuse to accept the election results. As Politico reported:

Sanders is planning a series of actions aimed at raising awareness of the possibility of Trump resisting leaving office if he does not win. The senator will give a speech on the issue in the near future, and send an email to his massive list of supporters about the topic on Friday.

“What we have got to do in the next two months is to alert the American people about what that nightmarish scenario might look like in order to prepare them for that possibility and talk about what we do if that happens,” he said.

According to an embargoed copy of his coming email, Sanders is planning to state, “This is not just a ‘constitutional crisis.’ This is a threat to everything this country stands for.”

It is unclear what, exactly, Sanders and the Democrats hope to achieve. The idea that Trump would not leave office could be a way to drive voter turnout by casting Trump as a dictator, something they have done for the past four years. It could also be used as a cover for Democrats to refuse to accept the results of the November election if Trump wins. The “Russia collusion” hoax, which vastest several years, was an outgrowth of Democrats’ refusal to accept that Trump won the election in 2016.

Or the theory could be used to justify drastic actions by Democrats in the new year, if they win. They have already said that they intend to end the filibuster, give amnesty to millions of illegal aliens, add new states (and hence Democratic Senators), and possibly pack the courts. Casting Trump as a dictator might be a way to argue that radical changes are necessary.