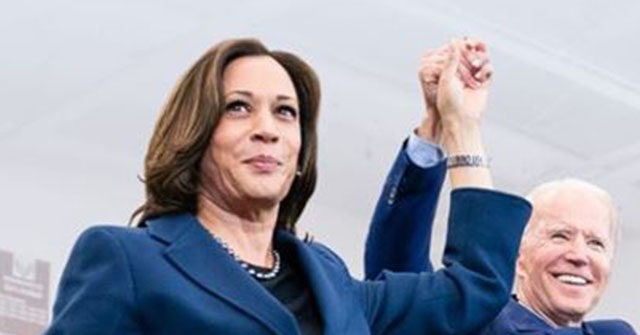 Sen. Kamala Harris (D-CA) may only be vice-presidential nominee on the Democratic ticket, but she’s already promising that a “Harris administration with Joe Biden” will be a boon to voters.

The California lawmaker, whom the former vice president said he chose as his running mate last month because of her readiness “to lead on day one,” told a group of Latino small business owners from Arizona on Saturday that it was vital they made the right choice this November.

“As part of our Build Back Better agenda, we will need to make sure you have a president in the White House who actually sees you, who understands your needs, who understands the dignity of your work, and who has your back,” Harris said in a five-minute virtual address to the group, according to the Arizona Republic.

“A Harris administration together with Joe Biden as the president of the United States, the Biden-Haris administration will provide access to 100 billion dollars in low-interest loans and investments for minority-business owners,” she added.

“A Harris Administration… together with Joe Biden” pic.twitter.com/swTkDJNStV

Harris’ remarks come as some Democrat strategists continue to express concerns over Biden’s fitness and stamina for the presidency. Since jumping into the 2020 race, the former vice president has flummoxed many with his frequent gaffes and misstatements on the campaign trail.

The issue came to a head last week when a one-time White House stenographer, who worked exclusively with Biden during the Obama administration, told the Washington Free Beacon that the former vice president had deteriorated since leaving office.

“It is a complete difference from what he was in 2017,” the stenographer said. “He’s lost a step and he doesn’t seem to have the same mental acuity as he did four years ago.”