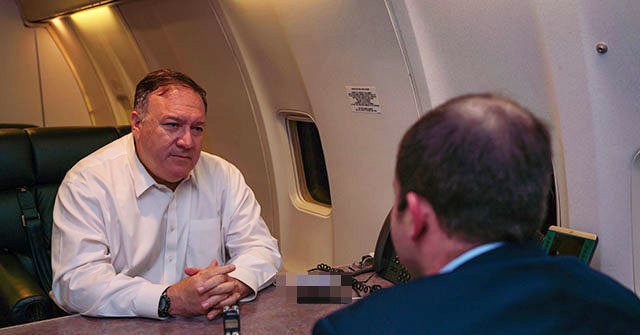 NICOSIA, Cyprus — Secretary of State Mike Pompeo told Breitbart News exclusively that President Donald Trump’s peace deals in the Middle East are “all connected” and stem from recognizing Iran as the primary threat to stability in the region.

Pompeo’s interview came late Saturday night aboard the U.S. Air Force jet transporting him and the U.S. delegation after he met with the president of the Republic of Cyprus, Nicos Anastasiades, whom he visited here after earlier in the day attending the opening of intra-Afghan peace talks in Doha, Qatar. As the jet touched down in Doha late Friday night the previous evening, the deal being rolled out this week between Bahrain and Israel to normalize relations was announced. Previously, the United Arab Emirates (UAE) and Israel announced they were normalizing relations. On Tuesday at the White House, representatives of both Bahrain and UAE are meeting with Trump in addition to Israeli officials including Prime Minister Bibi Netanyahu.

“It’s a great question. They are all connected,” Pompeo told Breitbart News when asked to connect the dots between the Afghan peace talks and these other peace deals being rolled out now. “The president laid down a strategy for how to secure America from instability and threats from the Middle East.”

Pompeo, who is at the White House with Trump and other American officials as part of the historic meetings for the peace deals on Tuesday, said that Trump’s Middle East policy strategy vision began by treating Iran as the main threat in the region.

“It began by recognizing the primary operator for instability, the Islamic Republic of Iran,” Pompeo said. “That central decision has begun to drive all of the elements of our foreign policy in the Middle East. Reduce our footprint in Afghanistan, get our young men and women home. Reduce our footprints in Iraq and Syria, be strong in terms of sanctions and place pressure on the regime, the Islamic Republic of Iran, and then lay out a strategy for Middle East peace which had multiple pieces right?”

Several of the steps that laid the groundwork for these major steps toward Middle East peace, Pompeo told Breitbart News, include recognizing Jerusalem as the capital of Israel and several other steps taken in Israel. That, he said, has lit a path forward for Arab countries in the region for a vision for peace.

“Some of this is reality: Recognize Jerusalem as the capital of Israel, acknowledge that the Golan Heights indeed is Israeli territory. We’ve also made clear that the settlements in the West Bank were necessarily unlawful,” Pompeo said. “All of those things come together to place the conditions where frankly countries in the Middle East can see a path forward for how you can take down risk and grow their economies. We think about these deals between Bahrain and the Emirates as security arrangements. That’s true, but the benefits to the economies of those three countries of opening up trade will be enormous.”

Pompeo, who on Saturday in Doha met with leaders of the Afghan government and Taliban delegations at the beginning of intra-Afghan peace talks as the U.S. is as he told Breitbart News on pace for a full withdrawal of all armed forces by next spring, said the U.S. sees Afghanistan and other countries eventually reaching a place where through “economic benefits” to the region they join other Arab nations in push for peace inside their countries and with the West. He said the hope is even Iran will one day come to the table for a real deal, rather than the flawed Iran deal from former President Barack Obama’s and former Vice President Joe Biden’s administration from which Trump withdrew the United States.

“Those economic benefits are the kind of thing that we hope one day is something we can do in Afghanistan,” Pompeo said. “We’ve made progress in Iraq as well by defeating the caliphate. All of those things come together to reduce risk from the Middle East. We hope that the Iranians will come to see that there is a pathway for them as well, but until they do, the pressure campaign will continue.”

Pompeo also said that while Afghan peace is still a ways away, and that Afghanistan becoming a country like UAE or Bahrain is still even further off, there definitely are other countries in the Middle East that are likely to soon join UAE and Bahrain soon.

“Yes there are,” Pompeo said.

Asked if it is a “peace through strength” doctrine, like what former President Ronald Reagan championed, Pompeo said it is—but the focus from Trump is on “economic strength.” He added that the president is unafraid, as he has demonstrated, to use military force however to demonstrate America’s might if needed.

“It’s absolutely the model, with an emphasis on economic strength,” Pompeo said. “The thing that America does best—our creativity, our innovation, our capacity to create opportunities for good all across the world—it’s absolutely peace through strength. We’re very much focused on making sure if there’s a bad actor, if Qassem Soleimani is threatening America, President Trump will never shy away from using military force. But we’re not going to be engaged in countries doing extended policing when they don’t generate safety and security for the American people.”

This is the second piece from Pompeo’s exclusive interview with Breitbart News. More is forthcoming.