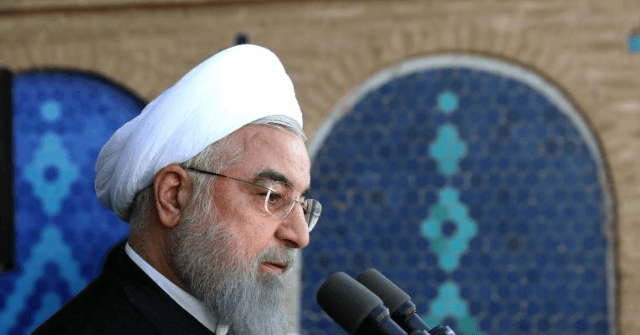 Iranian President Hassan Rouhani said during a government video conference on Monday that oil revenues have declined from $120 billion in 2011 to “just over $20 billion” last year, in large part due to pressure from renewed U.S. sanctions.

Radio Farda noted that even this gloomy estimate from Rouhani might have been considerably padded since Vice President Eshaq Jahangiri said in June that 2019 oil revenues were down to just $8 billion, less than half the figure Rouhani cited.

The head of Iran’s budget agency, Mohammed Baqer Nobakht, implied the situation was even worse later in the summer by saying Iran effectively “cannot sell even a drop of oil” because it cannot complete the international financial transactions necessary to receive payment.

The Iranian rial hit a new low against the U.S. dollar over the weekend, having lost about 49 percent of its value over the course of 2020.

Iran’s central bank chief Abdonnaser Hemmati nevertheless claimed on Tuesday that “economic growth is promising in comparison with the countries that have not faced any sanctions.” Rouhani claimed in June that Iran is experiencing positive economic growth even without oil income.

“Iranian officials presenting wholly different and sometimes contradictory statistics in their speeches has always been an expected and long-standing feature of the country’s government,” Radio Farda dryly observed.

Last week, Radio Farda reported that Iran’s major trading partners — India, China, Japan, South Korea, Russia, and Turkey — all posted severe declines in both Iranian imports and exports for the first half of 2020.

China used to be Iran’s biggest oil customer, but it has purchased no Iranian oil since the second half of 2019. Japan, South Korea, and Turkey all reported greatly reduced trade with Iran, generally from billions of dollars in volume down to millions. Iranian exports to South Korea have all but disappeared. The only entry on the international trade ledger that was not inked in red was Japan’s imports from Iran, which increased by 32 percent.

Radio Farda noted that Russia and several other major Iranian trading partners have not released recent trade figures. Russia appears to be deliberately withholding trade data for Iran and Cuba.

Iran is still shipping energy products to Venezuela, as Venezuelan Foreign Minister Jorge Arreaza confirmed the arrival of an Iranian ship on Sunday evening. Arreza said the Iranian ship “sailed to Venezuela without a name, so as not to be identified,” using a laborious route that appears to have taken it around southern Africa. Several other Iranian tankers carrying refined gasoline and oil industry supplies appear to be headed for Venezuela.

Reuters reported on Tuesday that Venezuela is reconfiguring its oil industry to work with Iranian materials supplied by illicit tanker runs like the one Arreaza confirmed. Venezuela is also growing reliant upon Iranian shipments of refined gasoline, with three more Iranian tankers full of fuel expected to begin arriving at the end of September. The United States seized four such tankers last month.

“We are helping each other. I think the Iranian experience will help us reinforce our management capacity,” Venezuelan dictator Nicolás Maduro said during a state television interview in late August, adding that he had to remain silent about further details because “we are in a war.”