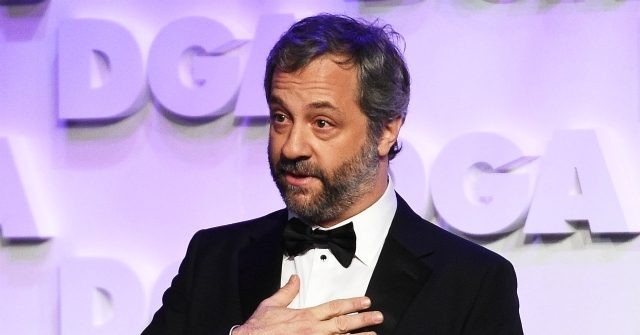 Hollywood director Judd Apatow has slammed Hollywood’s willingness to censor its content to appease China, saying that Beijing has successfully bought the “silence” of the industry’s power players on matters concerning human rights atrocities in the communist country.

In a preview of an upcoming interview for Mavericks with Ari Melber, Apatow — known for The 40-Year-Old Virgin, Anchorman, and Talladega Nights — called out a “corporate type of censorship that people don’t really notice” for regimes such as communist China and the Saudi Arabian monarchy.

What Apatow described as “much scarier” is how Hollywood has “completely shut down critical content about human rights abuses in China” by refusing to cover and include those themes on screen.

“[If I said] I want to write a movie about the concentration camps in China and Muslims in concentration camps. I want to write a movie about someone who escapes, no one would buy the pitch,” the Girls creator said. “Instead of us doing business with China and that leading to China becoming more free, what has happened is a place like China has bought our silence with their money.”

The 52-year-old Knocked Up director, who remains a staunch progressive activist and opponent of the Trump administration, also recently called out Disney over the release of Mulan, a film that was shot partly in the region of Xijiang where China has set up mass concentration camps for imprisoned Uyghur Muslims who are forced into labor.

“It is shameful that no US companies and very few politicians speak up about concentration camps in China. The United States has abandoned the world when it comes to human rights,” he wrote on Twitter last week. “They are not ‘detained’ they are being held in CONCENTRATION CAMPS. Apple uses that word because they don’t want to anger China. Maybe Disney and Apple should SPEAK UP & try to help a million people who were abducted and put in CONCENTRATION CAMPS.”

It is shameful that no US companies and very few politicians speak up about concentration camps in China. The United States has abandoned the world when it comes to human rights. https://t.co/h3yspyv2vg