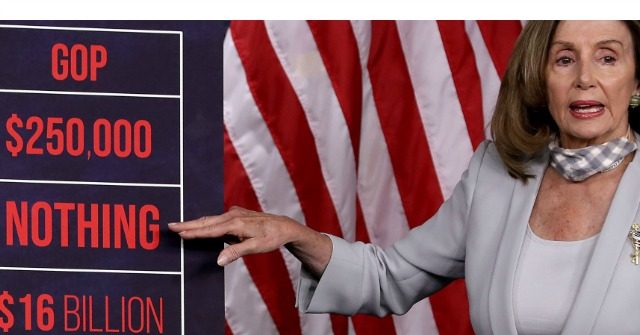 Politico reported that Pelosi has continued to pursue her hardline approach in negotiations with Republicans, demanding a coronavirus bill around $2.2 trillion.

The report arises as many coronavirus programs created by the CARES Act have languished over Pelosi’s reluctance to compromise with Trump and congressional Republicans.

However, her reluctance to find a middle ground with moderate Democrats has infuriated many of her most vulnerable members.

During a call with the moderate New Democrat Coalition and Democrat leadership on Tuesday, Rep. Kathleen Rice (D-NY) asked Pelosi why the House would not stay in session until they pass a deal. In response, the Speaker said to “take a poll of your colleagues.”

Rep. Abigail Spanberger (D-VA), who represents a district Trump won in 2016 by more than six percent, said during the call, “My conviction is to actually do my goddamn job and come up with a solution for the American people. We have to bring something to the floor.”

House Majority Leader Steny Hoyer (D-MD), the second highest-ranking Democrat, has pushed for Pelosi to change her strategy but said he would not “undermine” Pelosi.

In response to concerned Democrats, Pelosi said, “A skinny deal is not a deal. It is a Republican bill.”

“We can wait around forever for the proposal we think is the perfect proposal, and that obviously won’t be helpful to anybody. Time is of the essence here,” Rep. Jason Crow, a freshman swing district Democrat, said.

Rep. Kendra Horn (D-OK), a freshman swing district Democrat, said, “What truly ‘falls short’ is doing nothing. It is flatly unacceptable that congressional leadership is not at the table when businesses are closing, Americans are out of work, and families need help. The political games have to stop.”

What truly “falls short” is doing nothing. It is flatly unacceptable that congressional leadership is not at the table when businesses are closing, Americans are out of work, and families need help. The political games have to stop. https://t.co/OMGdCsSRG6