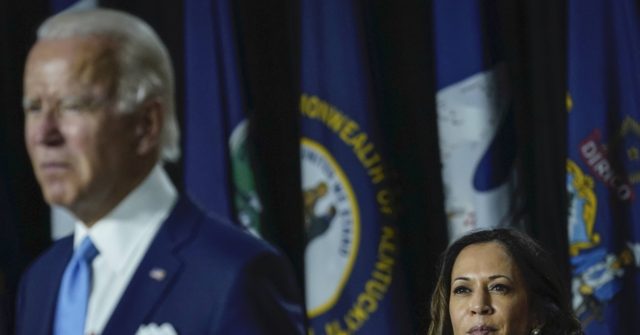 Former Vice President Joe Biden pitched U.S. military veterans on the notion of a “Harris-Biden administration” on Tuesday afternoon during a campaign swing through Florida.

Biden, who has aroused concerns over his fitness for the presidency in recent weeks, told reporters in Tampa that a White House helmed by himself and Sen. Kamala Harris (D-CA) would work to expand opportunities not only for veterans, but military families as well.

“It’s so much harder for military spouses to find good jobs and build their careers,” the Democrat nominee said. “We have to change that and we’re working on it… for example making it easier to carry your professional credentials with you, from one state to another, when your spouse moves.

“The Harris-Biden administration will relaunch that effort and make it easier for military spouses and veterans meaningful careers, to ensure teachers know how to support military children in the classroom, and to improve support for caregivers and survivors so much more than we do now,” the former vice president added.

It is unclear if Biden misspoke or was having technical issues, as his campaign has occasionally resorted to using teleprompters for public events.

Such language has led some, most notably on the right, to suggest the Biden campaign is deliberately pitching Harris as the dominant player on the Democrat ticket.

Biden himself has indulged such speculation by asserting that the major reason he picked Harris is because she is “ready to lead on day one.”

The Biden campaign did not return requests for comment on this story.

The Democrat nominee’s pitch for “Harris-Biden administration” comes only days after his running mate used similar language while addressing a virtual forum of Latino small business owners from Arizona.

“As part of our Build Back Better agenda, we will need to make sure you have a president in the White House who actually sees you, who understands your needs, who understands the dignity of your work, and who has your back,” Harris said on Saturday, according to the Arizona Republic.

“A Harris administration together with Joe Biden as the president of the United States, the Biden-Haris administration will provide access to 100 billion dollars in low-interest loans and investments for minority-business owners,” she added.

Both those remarks and Biden’s on Tuesday underscore the concerns that have arisen in recent months over the Democrat nominee’s fitness and stamina for the White House. Since jumping into the 2020 race last year, the former vice president has flummoxed even the most ardent of supporters with his frequent gaffes and misstatements.

Last week, a one-time White House stenographer, who worked exclusively with Biden during the Obama administration, told the Washington Free Beacon that the former vice president had deteriorated since leaving office.

“It is a complete difference from what he was in 2017,” the stenographer said. “He’s lost a step and he doesn’t seem to have the same mental acuity as he did four years ago.”