Trump has accused Biden of being a tool of the far left, claiming Democrats are pushing socialist ideas, but the former vice president turned that comparison around in an interview with the Spanish language outlet.

“Trump has more in common with Castro than with Churchill,” Biden said, adding, “Look who he admires. He admires Putin, he admires Xi, he admires everyone who behaves in an authoritarian way. I am the exact opposite. I have faith in the democratic system.”

Many of Florida’s Spanish-speaking residents arrived in the Sunshine State after fleeing socialist or communist regimes such as Castro’s Cuba. The former vice president is looking to gain ground among Hispanic voters in the battleground state as Trump held a narrow lead over him with that demographic in an NBC/Marist poll last week. The same poll had the two candidates in a deadlock for overall support in the state.

In 2016, Democratic nominee Hillary Clinton beat Trump by more than 25 points among Florida’s Hispanic voters, according to exit polls, but Trump still won the state. 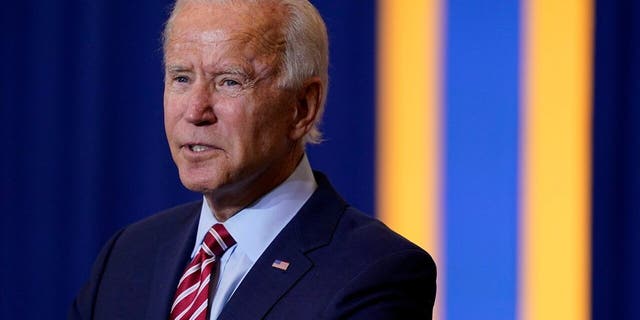 Biden told reporters as he headed to Florida this week that his mission in the state would be to court Spanish-speaking voters.

“I will talk about how I am going to work like the devil to make sure I turn every Latino and Hispanic vote,” Biden said when asked by reporters what his message would be in the country’s largest traditional general election battleground state.

Biden caught some flack for a cringe-worthy moment at a campaign event in Kissimmee, Fla. Tuesday evening.

Biden paused and reached for his phone in his pocket when he got to the podium at the event, which was meant to commemorate Hispanic Heritage Month.

“I just have one thing to say,” Biden began as he looked down at his phone. “Hang on here.”

He then held his phone to the microphone, which began playing the 2017 hit song “Despacito” from Luis Fonsi, who had introduced the candidate. After roughly 15 seconds of bobbing his head and gently dancing behind the podium, he paused the music.

“I’ll tell you what — if I had the talent of any one of these people, I’d be elected president by acclamation,” Biden chuckled.