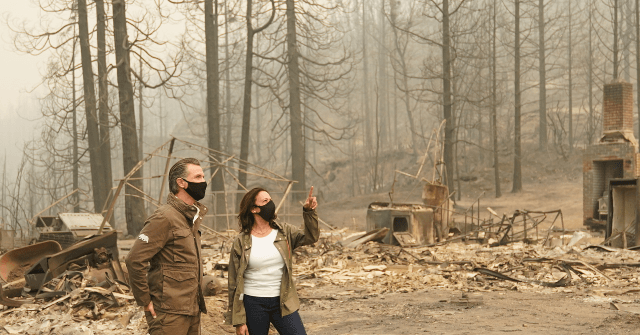 A California family has accused Gov. Gavin Newsom (D) and Sen. Kamala Harris (D-CA) of trespassing on their property for a photo opportunity after wildfires ravaged their home.

“The California lawmakers visited Fresno County Tuesday to survey the damage of the flames engulfing much of the West Coast, and received a briefing from Cal Fire and U.S. Forest Service officials,” Fox 29 reported.

The two reportedly stopped at Pine Ridge Elementary in Auberry, then walked across the street to the family’s residence.

Spent time surveying a burn site with @GavinNewsom in an area that has been devastated by the recent wildfires in California. I’m incredibly grateful for the courage of our brave firefighters and those who have come near and far to help those fleeing the destruction. pic.twitter.com/EHSUPgkOsl

Trampas Patten, who identified himself in a Facebook post as the son of the homeowners, said he was “really frustrated” that “these two politicians used my parents [sic] loss for a photo opportunity to push their political agenda”:

Political party wouldn’t have made a difference in this moment. Decent human beings that have character and class, wouldn’t air someone else’s misfortune on national television! Think about this when you go to the polls in a few weeks to vote. Look at this picture closely, imagine it is what is left of your hard work, hopes, dreams, place of sanctuary. Do you want this kind of leadership, using you and your loss for political gain?!

Patten added that his parents had not yet been allowed to return to their property to survey the damage.

“I guess those property taxes my parents pay allow politicians to do this! Private property doesn’t exist in California anymore!” he stated.

In a tweet on Tuesday, Newsom took the photo opportunity to blame so-called climate change for the devastating fires:

However, prior to his visit, the governor thanked President Trump for his help in regard to the wildfires, according to Breitbart News.

“I want to thank you and acknowledge the work you have done to be immediate in your response,” he said, adding that the response from the Federal Emergency Management Agency (FEMA) had been “profoundly significant.”

“This isn’t just devastation, this is our lives. This is where we grew up, these are our memories. And to not have that — to feel so helpless — and I guess that’s what we’ve all been thinking, is that we were so helpless,” Bailee noted.

“Because we weren’t there, we haven’t gotten to deal with our loss. Instead, we’re having to watch it play out on social media and news,” she concluded.