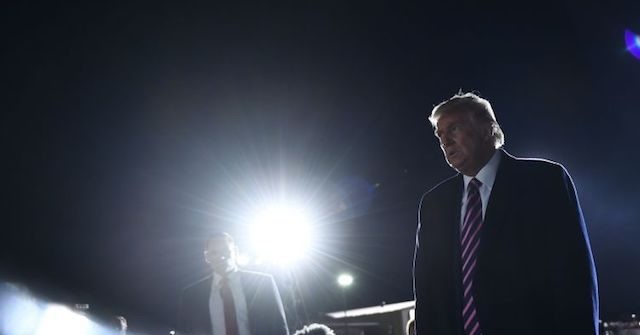 President Donald Trump on Friday reacted briefly to the news of the death of Supreme Court Justice Ruth Bader Ginsburg.

The president spoke to reporters briefly prior to boarding Air Force One after a campaign rally in Minnesota.

Trump took the stage prior to the news, which broke about 15 minutes after he began speaking.

The president is currently traveling back to Washington, DC, and could theoretically speak to reporters on the matter further on the plane or as soon as the flight lands at Joint Airforce Base Andrews in Maryland.

Senate Majority Leader Mitch McConnell announced in a statement on Friday that the Senate would vote on Trump’s nomination to replace Ginsburg.

“President Trump’s nominee will receive a vote on the floor of the United States Senate,” McConnell wrote.

Today, our Nation mourns the loss of a titan of law. Justice Ruth Bader Ginsburg served more than 27 years as an Associate Justice of the Supreme Court of the United States — notably just the second woman to be appointed to the court. She was a loving wife to her late husband, Martin, and a dedicated mother to her two children.

Renowned for her brilliant mind and her powerful dissents at the Supreme Court, Justice Ginsburg demonstrated that one can disagree without being disagreeable toward one’s colleagues or different points of view. Her opinions, including well-known decisions regarding the legal equality of woman and the disabled, have inspired all Americans, and generations of great legal minds.

A fighter to the end, Justice Ginsburg battled cancer, and other very long odds throughout her remarkable life. Our thoughts and prayers are with the Ginsburg family and their loved ones during this difficult time. May her memory be a great and magnificent blessing to the world.