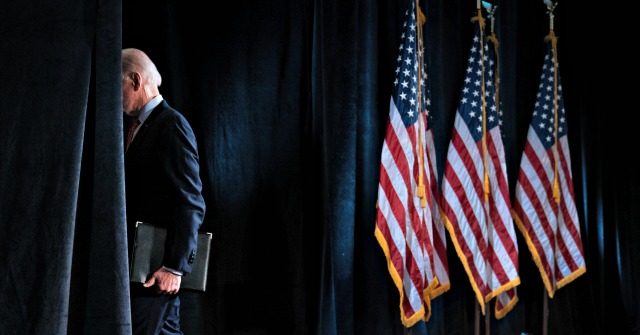 Senate Democrats are readying for a protracted effort to keep the Supreme Court seat vacated by the late Justice Ruth Bader Ginsburg open until at least January, when a new administration can take office, but those plans could be hampered by former Vice President Joe Biden’s reluctance to release a shortlist of nominees for the post.

On Friday, shortly after Ginsburg’s passing was announced by Chief Justice John Roberts, Senate Minority Leader Chuck Schumer (D-NY) joined a bevy of progressive activists and groups by calling forthe seat to remain vacant until the next president is installed in office.

“The American people should have a voice in the selection of their next Supreme Court Justice. Therefore, this vacancy should not be filled until we have a new president,” the New York lawmaker wrote on social media, shortly after Ginsburg’s passing was confirmed by the press.

Schumer’s remarks, in particular, signal that Democrats are mobilizing to keep President Donald Trump from filling the vacancy and cementing a 6-to-3 conservative majority on the nation’s highest court. That effort, which will take place not only in the chambers of Congress, but also in 2020 battlegrounds across the country, is likely to be divisive. At the moment, Democrats are relying on precedent that Senate Majority Mitch McConnell (R-KY) set in 2016 when refusing to hold confirmation hearings on then-President Barack Obama’s choice to fill the Supreme Court seat vacated by the late Antonin Scalia.

Biden, himself, made such an argument late Friday during a hasty press conference set up in Wilmington, Delaware.

Undercutting Biden’s argument, in part, is that the situation is not exactly similar. Although the circumstances surrounding the vacancies are comparable, the one marked difference is that the Democrat nominee is urging Congress to withhold confirmation until the voters can decide the issue, while simultaneously providing little detail as to how his choice for the court would differ from that of the incumbent.

By comparison, in 2016, then-candidate Trump made the unprecedented move of pledging that his Supreme Court nominees, including the individual that would ultimately fill Scalia’s seat, would be chosen from a public roster of attorneys and legal scholars vetted by the Federalist Society and the Heritage Foundation. That action at the time illustrated to voters the profound difference in judicial philosophy between Garland and a nominee of Trump’s choice.

Exit polling from 2016 shows that Trump’s effort at transparency paid off, with one in five voters having cited the Supreme Court as their most important issue. Among such voters, Trump bested former Secretary of State Hillary Clinton by double digits (56 percent-to-41 percent).

Trump’s position in 2016 stands in stark contrast to that taken by Biden this election cycle.

Since entering the 2020 contest, the former vice president has refrained from discussing the Supreme Court in depth on the campaign trail. Although Biden has released no less than 48-policy papers and proposals, ranging from a comprehensive plan for bankruptcy reform to social and economic justice for the country’s Native American tribes, none of them pertain to judicial issues.

The closest that Biden has come to elaborating his position was during the Democrat primaries, when he came out in opposition to packing the Supreme Court and pledged to make support for Roe v. Wade a litmus test for all judicial appointments. Since winning the nomination, the former vice president has avoided the topic nearly altogether, apart from promising that, if elected, he would appoint the first black woman to the Supreme Court.

Most notably, Biden has also been reluctant to adopt Trump’s strategy of releasing a list of individuals he would be likely to nominate to the Supreme Court provided he was victorious this November. The former vice president has resisted the move even amid calls to do so, not only by Republicans, but progressive groups as well.

Given Biden’s silence, some in Trump’s orbit have begun speculating publicly that the former vice president plans to appoint judges that are out of the political mainstream.

“President Trump has fulfilled his promise to appoint originalist judges who are the guardians … of American jurisprudence,” Jenna Ellis, a legal adviser to the incumbent’s reelection campaign, said recently. “Joe Biden would fill the bench with activists and socialists who would give government increasing power and trample our rights.”

The former vice president’s campaign did not respond to requests for a response to this story.