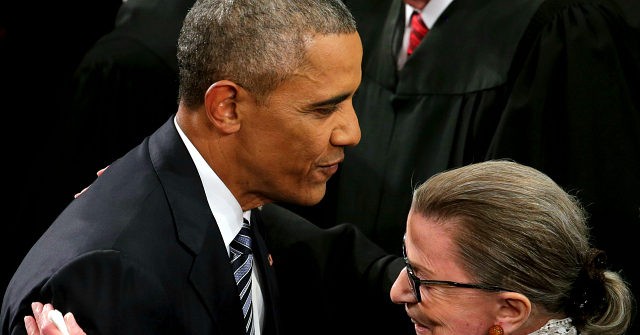 After celebrating Ginsburg’s legacy, the former president reasserted in a statement that Ginsburg requested that President Donald Trump not be the one to name her replacement.

“[S]he also left instructions for how she wanted her legacy to be honored,” Obama wrote.

According to her granddaughter, Clara Spera, Ginsburg dictated to her that her “most fervent wish is that I will not be replaced until a new president is installed.”

Obama recalled that Merrick Garland, his own choice to replace Supreme Court Justice Antonin Scalia after he died in 2016, was denied a confirmation vote by Senate Majority Leader Mitch McConnell on the notion that a president should not have a Supreme Court appointment in an election year.

Obama complained that Republicans “invented the principle that the Senate shouldn’t fill an open seat on the Supreme Court before a new president was sworn in.”

The former president argued that Republicans should be consistent about their approach, “not based on what’s convenient or advantageous in the moment.”

“The rule of law, the legitimacy of our courts, the fundamental workings of our democracy all depend on that basic principle,” he said.

But Senate Majority Leader Mitch McConnell argued Friday night that the precedent set by the Senate in 2016 was that voters elected a Republican majority in 2014 to check Obama’s power in his second term, denying him a third Supreme Court nomination.

McConnell said that Americans retained a Republican Senate majority during the 2018 midterms, giving them the authority to confirm a future Supreme Court nominee from President Donald Trump.

But Obama argued that since votes were already being cast, Republicans should hold to the standard that they set for the end of his second term.

“The questions before the Court now and in the coming years — with decisions that will determine whether or not our economy is fair, our society is just, women are treated equally, our planet survives, and our democracy endures — are too consequential to future generations for courts to be filled through anything less than an unimpeachable process,” he concluded.