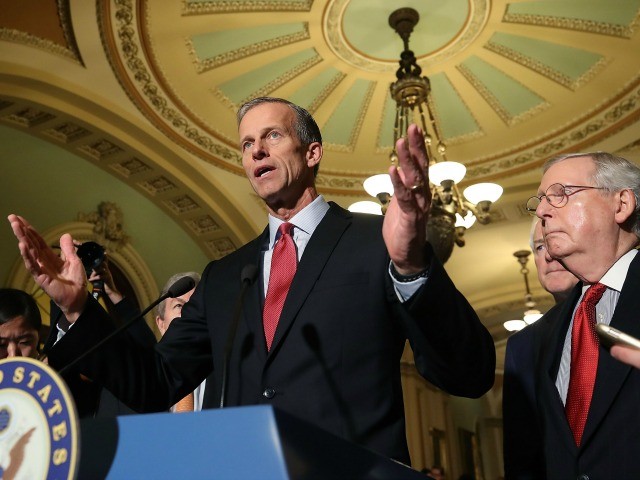 A spokesman for Sen. John Thune (R-SD) said the Senator supports “moving forward as soon as possible” on confirming Nathan Simington, President Trump’s pick to replace Michael O’Rielly on the Federal Communications Commission (FCC), a crucial appointment that could tip the balance in the battle against Big Tech censorship.

The regulatory body is a crucial force on matters related to internet policy. It will play a critical role in implementing President Trump’s push to narrow the legal protections enjoyed by social media companies, that currently allow them to censor their users for virtually any reason.

The FCC is currently short of one commissioner, after Obama-appointed Republican Michael O’Rielly failed to secure the President’s support for renomination.

O’Rielly had expressed skepticism about Trump’s challenge to Big Tech’s legal privileges, conflating their legal protections under Section 230 of the Communications Decency Act (that applies exclusively to tech platforms) with the First Amendment (that applies to everyone).

To replace O’Rielly, President Trump has nominated Nathan Simington, a senior adviser at the Commerce Department’s National Telecommunications and Information Administration (NTIA). Simington is said to be on board with the President’s agenda on social media censorship.

Sen. Thune, who sits on the Senate Commerce Committee, will be one of the Senators who votes on Simington’s confirmation. The Senator’s spokesman confirmed that Thune will support Simington’s nomination.

“If Chairman Wicker… schedules a hearing and Leader McConnell, who controls the floor schedule, puts him on the floor before the election, he would support the nomination, and he’s in no way ‘slow-walking’ it,” said Thune’s spokesman.

It falls to Sen. Roger Wicker (R-MS), who chairs the Commerce Committee, to notice a hearing. This could have been done last week after President Trump announced Simington’s nomination, but it has not happened yet.

Thune’s spokesman said the Committee needs paperwork from the White House before proceeding, although the Senate has no formal requirement that such paperwork be received before notice of a confirmation hearing is posted. Such notices can be posted without even naming the potential nominee.

The growing likelihood of a Supreme Court nomination showdown means the Senate is likely to be in session longer than anticipated this fall, potentially allowing more time for Simington to be confirmed. It remains to be seen if Chairman Wicker will continue to allow paperwork hold up the process.

Allum Bokhari is the senior technology correspondent at Breitbart News. His upcoming book, #DELETED: Big Tech’s Battle to Erase the Trump Movement and Steal The Election, which contains exclusive interviews with sources inside Google, Facebook, and other tech companies,  will be released on September 22 and is currently available for preorder.