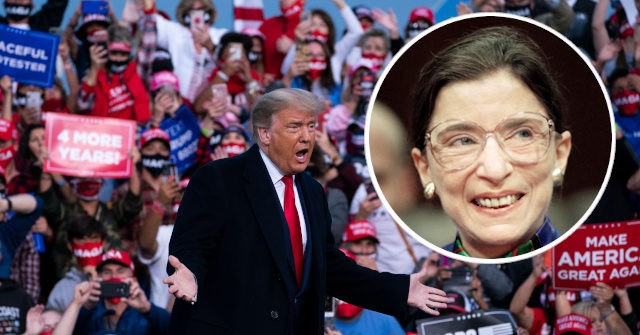 Supporters of President Donald Trump on Saturday chanted “Fill that seat!” when he spoke about the Supreme Court at a rally in North Carolina.

The president opened up his campaign rally paying tribute to Supreme Court Justice Ruth Bader Ginsburg who died on Friday.

He praised Ginsburg as a “legal giant,” noting her “fierce devotion to justice” and her courageous battle against cancer.

Trump also recalled Ginsburg’s friendship with more conservative members of the court, like Justice Antonin Scalia, who died in 2016.

“Her relationship with Justice Scalia is also a powerful reminder that we can disagree on fundamental issues while treating each other with decency, dignity, and respect,” Trump said.

But the president said he would appoint someone to replace her on the court, noting that it was his Constitutional duty.

Supporters shouted, “Fill That Seat!” repeatedly as the president spoke.

He said he would not let them down.

“Both the White House and the Senate majority have a moral duty to fulfill the promises they made to the voters and that is exactly what we are going to do,” he said.

The president took an informal poll of his rally crowd, asking them to cheer when asked whether he should select a man or a woman to fill the seat.

The crowd cheered the loudest when he proposed putting a woman on the court.

He predicted that “fake news CNN” the following day would accuse him of “playing games” with the Supreme Court seat.

“It will be a woman, a very talented, very brilliant woman,” Trump said, noting that he had “numerous women” on his list of potential Supreme Court nominees.

The president confirmed that he would select a woman to replace Ginsburg and that his choice would be announced the following week.