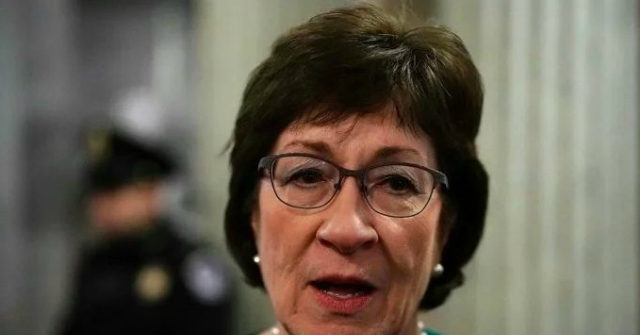 Sen. Susan Collins (R-ME) has planted herself on the fence in the debate over the late Ruth Bader Ginsburg’s empty Supreme Court seat, saying that the Senate should wait until after the November election to vote on the nominee, while adding that she has “no objection” to the Senate Judiciary Committee starting the process of filling the vacancy.

The senator said that she believes the decision over the next Supreme Court justice “should be made by the President who is elected November 3.” But she also acknowledged that President Donald Trump has the Constitutional authority to put forth a nominee.

Collins issued a statement Saturday afternoon in which she expressed her mixed sentiments about the succession of Ruth Bader Ginsburg.

She said in the statement:

In order for the American people to have faith in their elected officials, we must act fairly and consistently — no matter which political party is in power. President Trump has the constitutional authority to make a nomination to fill the Supreme Court vacancy, and I would have no objection to the Senate Judiciary Committee’s beginning the process of reviewing his nominee’s credentials.

Given the proximity of the presidential election, however, I do not believe that the Senate should vote on the nominee prior to the election. In fairness to the American people, who will either be re-electing the President or selecting a new one, the decision on a lifetime appointment to the Supreme Court should be made by the President who is elected on November 3rd.

My statement on the Supreme Court vacancy: pic.twitter.com/jvYyDN5gG4

Collins is one of a handful of Republican Senators whose position on the Supreme Court battle could put them on a collision course with President Trump. Though Collins voted to confirm Brett Kavanaugh in 2018, her statement on Saturday indicates that she won’t take the president’s side when it comes to voting on his nominee before Election Day.

Other senators who are expected to oppose a Senate vote before the election include Mitt Romney (R-UT) and Lisa Murkowski (R-AK). Murkowski recently said in an interview that she would not vote to confirm a nominee before the election. Romney is a Never Trumper who has emerged as one of the president’s biggest foes in the Republican Party.