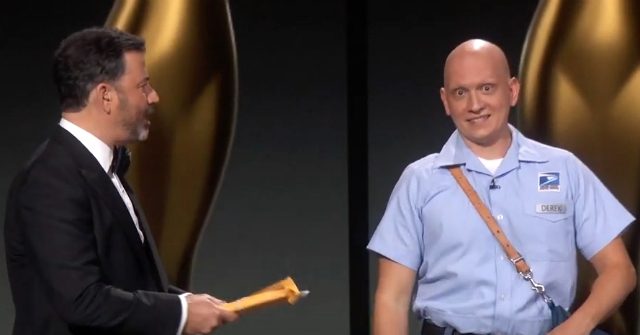 The 72nd Emmy Awards, broadcast live on ABC, pushed vote-by-mail with the ceremony’s host Jimmy Kimmel being handed a list of Emmy nominees by actor Anthony Carrigan, who played a Russian from Florida, donning a USPS uniform, who says to Kimmel “it’s okay to mail in” your ballot.

“Welcome back to the Emmys. We have a lot of awards to give out. And I intend to do that as soon as I get the batch of envelopes which are definitely supposed to be here now,” Jimmy Kimmel said. “You’re the postman? What happened to Colin?”

“Where are you from Derek?” Kimmel asked.

“St. Petersburg. I’m from the Sunshine State, where the old people die, and the young people wear the tank top,” Carrigan said.

“How long have you been working for the Post Office Derek?” Kimmel asked.

“I start just before election, 2016,” Carrigan said. “May I please take your ballot?”

“I’m not ready to vote,” Kimmel says. “I just need the envelopes.”

“It’s okay to mail in,” Carrigan says, with an ominous smile.
“I’ll do that from my house. thank you,” Kimmel says.

“It’s so safe,” Carrigan responds, looking at the mail.

The political bit at the Emmys come as Democrat continue to push voting by mail, with several states mailing voters ballots. It’s estimated that some 75 percent of Americans will be eligible to vote by mail in the presidential election.

Later in the show, while accepting the Primetime Emmy Award for Outstanding Lead Actress in a Limited Series or Movie, actress Regina King said “We gotta vote. Have a voting plan. Be a good human. Rest in power RBG.”

Jerome Hudson is Breitbart News Entertainment Editor and author of the forthcoming book 50 Things They Don’t Want You to Know About Trump. Order your copy today. Follow Jerome Hudson on Twitter @jeromeehudson