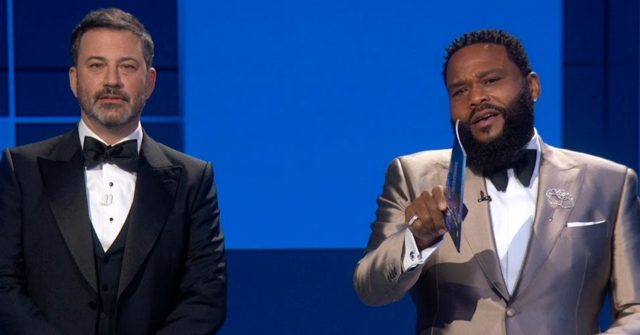 The 72nd Emmy Awards host Jimmy Kimmel joined Black-ish star Anthony Anderson in a chant of “Black Lives Matter” during the live broadcast on Sunday, in a skit that saw Anderson lament how the awards show was forced to go virtual, stopping all the black nominees and winners from basking in their victory together.

“You know we have a record number of black Emmy nominees this year, which is great,” said Anderson, after joining Kimmel on stage. “This was supposed to be the blackest Emmys ever. You wouldn’t have even been able to handle how black it was going to be. But because of covid, we can’t even get in the damn building.”

“We would have had speeches, quoting our great poets,” he continued. “But instead of that sexy melanated energy, here I am alone in a sterilized green room, trying not to sneeze on a lama.

Anderson then successfully coaxed Kimmel into chanting Black Lives Matter. “You know what? I’m still routine for everybody black,” Anderson said. “Because black stories, black voices, and black lives matter. Say it with me, Jimmy.”

“Black lives matter!” the pair then chanted, with Anderson urging Kimmel to shout it loud enough that “Mike Pence can hear it.”

The chanting was not the only political posturing of the night. Actor Mark Ruffalo called on viewers to vote for “compassion and kindness” in the upcoming presidential election. “We have a big, important moment ahead of us. Are we going to be a country of division and hatred, a country only for a certain kind of people, or are we going to be one of love and strength, fighting so all of us have the American dream?” Ruffalo said. “That’s what we’re facing right now, so go out and vote for compassion and kindness.”