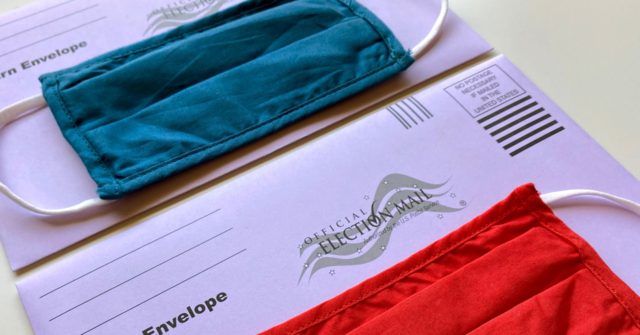 The Pennsylvania Supreme Court issued three rulings on Thursday, extended the deadline for mail-in ballots to the Friday after Election Day, ruled voters could use dropbox to return mail-in ballots, and removed the Green Party’s presidential ticket from the ballot.

Democrats are reportedly expected to vote in far larger numbers by mail than Republicans, who will reportedly vote more in person.

Benninghoff decried the state Supreme Court rulings, charging it would not only make Pennsylvanians’ vote insecure but also lead to fraud that would benefit Biden’s campaign.

“Well, sadly, they’re, really in my opinion, jeopardizing every person’s vote and the security of that vote. I think it’s ironic that the Democrat Party wants to be the party perceived to be about openness and diversity, but yet they work very hard to kick a third-party candidate, the Green Party candidate,” Benninghoff told Breitbart News Saturday host Matthew Boyle.

He added the rulings would allow for people to exploit “opportunities for fraud is only to help out Joe Biden.”

“These kind of things should outrage the average voter, it’s just not right, and to be changing the gameplays in the middle of the game is ridiculous,” he added.

“We don’t want election night to turn into election week or election month,” Benninghoff said regarding the extended mail-vote deadline.

“It’s self-evident to me that this is all about trying to steal the election and take away your vote,” he said.

Well, first of all, we are going to seek every option possible, that’s legislative or appealing to the higher courts. As you know very well, anything that we pass through legislation has to get the endorsement of the governor, and he’s throwing a lot of vetoes, and I suspect he would veto anything that he put out to changes this. This is what he wanted, and he’s wanted to count ballots for weeks or two after the election. We think that is wrong, and we are in the process currently as I speak, preparing as I say, a motion for stay of that directive by a citizen to the Supreme Court. In addition, we will be during our very best to file in the federal courts; election law is a universal right of Pennsylvanians and Americans, and they should secure it to the best of their ability and not go along with this 5-2 Democrat mandated majority of the courts said in their ruling.

Boyle noted the petition to the Supreme Court would go to Justice Samuel Alito.

“We believe that you people elect your representatives, you elect your Senate, and by our own statute and law of the Constitution, it is the legislature that deals with election law, not the governor’s office or the courts as we’ve seen too often. These courts want to legislate and interpret the law. That’s right; it’s the separation of powers, and I think the federal courts need to step up and take this case and speak loudly all across America that separation of powers are there for a reason and if they want to be legislators, they ought to run for the legislature and not the judge positions and I” m hoping that the federal courts will rule in our favor,” he explained.

Boyle then said the state House majority “are in the thick of this fight” and that “Pennsylvania is clearly on the frontlines.”

Benninghoff then charged that Pennsylvanians should call their local county commissioners to make sure that their local governments do not make these last-minute changes.

He said that the, “General public needs to call their county commissioners and make sure that they are not allowing these perverse changes to occur in their own county. They get elected every four years and need to hold them accountable because they all serve on their local election board, and it’s paramount that they are and say we don’t want these shenanigans, we don’t want drop boxes.”