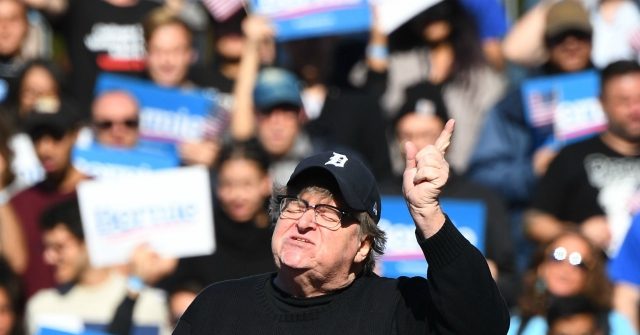 Moore spent most of his September 20 podcast urging leftists and Democrat voters to rise up and speak out to prevent President Trump from fulfilling his promise to pick a Supreme Court justice to fill Ginsburg’s seat on the nation’s highest court. As he wrapped up his hour-long podcast, Moore turned to Democrat House Speaker Nancy Pelosi and urged her to refuse to pass the government’s budget to prevent the U.S. Senate from “having the funds” to continue operating.

“You have to do something that the Republicans have been doing for decades,” Moore said, addressing the Speaker. “For the first time… you have to block the continuing resolution that funds the government and just let it shut down,” Moore said of the bill to fund the government that will soon be hitting the House floor for a vote.

“Shut the whole damn thing down. Shut the government down, so they do not have the funds to try to ram through this person they want to get on the Supreme Court before Trump’s gone,” Moore said.

Despite Fahrenheit 11/9 director’s proclamation, there is not yet any “this person.” Moore’s preemptive attack on “this person” is being delivered before any SCOTUS candidate has even been presented to the U.S. Senate. We don’t even know who “this person” might be.

“Just take the money out of the system that runs the halls of Congress,” Moore continued. “Or, make it contingent on Mitch McConnell signing a pledge, in writing, that he will put no Supreme Court nominee in front of the Senate before inauguration day.”

However, the House of Representatives has no role whatsoever in picking, considering, or placing a nominee on the high court. U.S. Senate leader Mitch McConnell has no obligation at all to answer to Nancy Pelosi concerning Supreme Court picks.

“I know, some people won’t like this,” Moore concluded his rant on the matter, “but we’re all going to have to sacrifice here, a little bit, for a week or two — or whatever it is — to make sure that the Republicans… cannot do the job that they’re going to try to do, to not pull off another one of their crimes.”