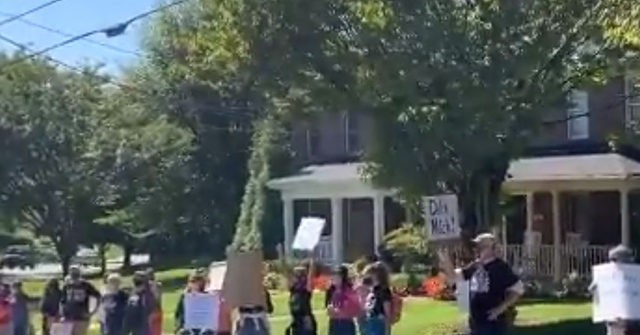 Protesters gathered outside Senate Majority Leader Mitch McConnell’s home Saturday in Louisville, Kentucky, following his announcement that the Senate would vote on a Supreme Court nominee.

“The Senate majority leader is a key figure in determining whether a nominee appointed by President (Donald) Trump will succeed the late Justice Ruth Bader Ginsburg on the Supreme Court before Election Day,” according to Fox News.

Protesters carried signs that had phrases such as “Ruth Sent Us,” and “No Ethics No Shame,” written on them.

It was unclear whether McConnell was at home or in Washington when the event took place.

Just before 1:00 p.m., police arrived and directed the group to stay out of the street, according to the Journal. However, some protesters appeared to encourage others to stand in the roadway.

This is the scene outside Sen. McConnell’s house, where a protest began over McConnell’s statement regarding the Supreme Court justice seat. Police came to clear the road, and protesters have been arguing with an officer for about 20 minutes over blocking the road. pic.twitter.com/6n0rgEVKxo

“Police eventually moved to the edges of the demonstration and blocked traffic near the intersection of Yale Drive and Dundee Road, stating that vehicles driving down a hill may not spot protesters in the roadway before it was too late,” the Journal reported.

Officers arrested one protester on charges of disorderly conduct and improper parking after she allegedly used a pharmacy’s parking lot without buying anything inside the store.

McConnell announced Friday night the Senate would vote to replace the late Justice Ginsburg, according to Breitbart News.

“President Trump’s nominee will receive a vote on the floor of the United States Senate,” he wrote in a statement.

Prior to his announcement, Senate Minority Leader Chuck Schumer argued Ginsburg should not be replaced until after the November election.

“The American people should have a voice in the selection of their next Supreme Court Justice. Therefore, this vacancy should not be filled until we have a new president,” he wrote on Twitter.

Ginsburg passed away Friday at the age of 87 due to “complications of metastatic pancreatic cancer,” according to a statement by the Supreme Court.