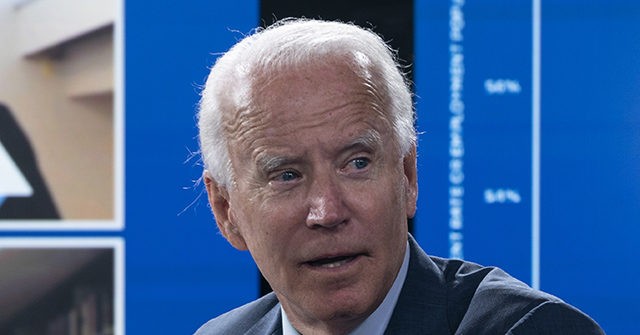 During an interview with Green Bay’s WBAY on Monday, 2020 Democratic presidential nominee former Vice President Joe Biden declined to say whether he would add justices to the Supreme Court if President Donald Trump’s pick to replace Justice Ruth Bader Ginsburg is confirmed and Democrats control both chambers of Congress and the White House.

Reporter Brittany Schmidt asked, “If Trump’s Supreme Court pick goes through, but you win the election, and let’s say the Democrats then take over the Senate, but maintain the House, would you consider adding more Supreme Court justices to the bench?”

Biden responded, “It’s a legitimate question, but let me tell you why I’m not going to answer that question. Because it will shift the focus. That’s what he wants. He never wants to talk about the issue at hand. He always tries to change the subject. Let’s say I answer that question, then the whole debate’s going to be, what Biden said or didn’t say, Biden said he would or wouldn’t. That’s going to — the discussion should be about why he is moving in a direction that’s totally inconsistent with what the founders wanted. … Voters get to pick the president, who gets to make the pick, and the Senate gets to decide. We’re in the middle of the election right now, remember, you know people are voting now. By the time this Supreme Court hearing would be held, if they hold one…it’s estimated 30 to 40% of the American people will already have voted. It is a fundamental breach of constitutional principle. It must stay on that and it shouldn’t happen.”