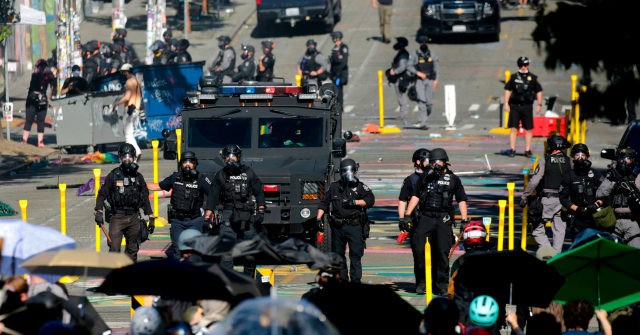 The Department of Justice (DOJ) has announced a list of cities or “jurisdictions” in response to a Presidential Memorandum to review federal funding for cities where ongoing violent protests and riots have destroyed property and even resulted in deaths.

The DOJ said on Monday that Seattle, Portland, and New York City are on the list for review after President Donald Trump said cities that are permitting “anarchy, violence and destruction of American cities,” should not receive federal funding.

The memorandum said, in part:

It is the policy and purpose of the United States Government to protect the lives and property of all people in the United States from unlawful acts of violence and destruction.  Without law and order, democracy cannot function.  Americans cannot exercise their rights, including their rights to peaceful expression, assembly, and protest. Property is destroyed, and innocent citizens are injured or killed.

Unfortunately, anarchy has recently beset some of our States and cities.  For the past few months, several State and local governments have contributed to the violence and destruction in their jurisdictions by failing to enforce the law, disempowering and significantly defunding their police departments, and refusing to accept offers of Federal law enforcement assistance.  As a result of these State and local government policies, persistent and outrageous acts of violence and destruction have continued unabated in many of America’s cities, such as Portland, Seattle, and New York.

When state and local leaders impede their own law enforcement officers and agencies from doing their jobs, it endangers innocent citizens who deserve to be protected, including those who are trying to peacefully assemble and protest. We cannot allow federal tax dollars to be wasted when the safety of the citizenry hangs in the balance. It is my hope that the cities identified by the Department of Justice today will reverse course and become serious about performing the basic function of government and start protecting their own citizens.

The New York Post reported on the DOJ move:

White House budget director Russ Vought is set to issue guidance to federal agencies on withdrawing funds from the cities in less than two weeks.

The list of cities eligible for defunding will be updated periodically, the feds have said.

It is not yet clear what funds are likely to be cut, but the amount of money siphoned from New York City could be massive, given the Big Apple gets about $7 billion in annual federal aid.

The DOJ announcement includes the criteria for jurisdictions to be on the list:

The announcement than described how the three cities make the list: