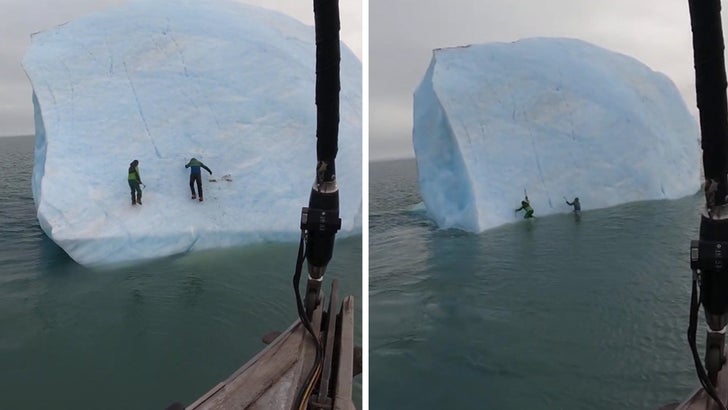 They say don’t go chasing waterfalls … advice that should extend to icebergs, as this adventurous duo learned the hard, and very cold, way in Arctic waters.

A group of explorers were sailing the open seas of Svalbard — an archipelago between Norway and the North Pole — when they came across this iceberg.

Might seem sketchy, but the guys who started scaling the huge chunk of ice last month are experienced climbers. One of them, Mike Horn, has been a famed explorer for more than 30 years. They obviously didn’t expect what happened moments after they started scaling it.

Check it out … they start to make their way up and across using ice picks and boots with crampons — but as the boat they arrived on starts to pull away, the iceberg began to slowly tilt … before the whole damn thing toppled into the water.

Don’t worry, this isn’t a “Faces of Death” clip — the guys were miraculously able to escape being crushed, and the boat came back to pull ’em outta the icy drink.

The Titanic-sized lesson here: When someone yells, “Iceberg, right ahead!” … don’t jump ON said iceberg.