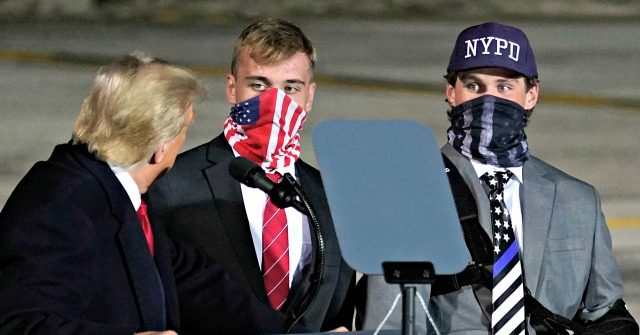 “They’re good looking kids. I want to congratulate you,” Trump said as the two students joined him on stage. “You’ve become famous.”

The two students, Brady Williams and Jarad Bentley, ran onto the field with a “Thin Blue Line” and a “Thin Red Line” flag before their game on September 11th. Officials from Little Miami School District suspended the students, but they were eventually reinstated after the story went national.

When asked if they were still glad they did it, Williams replied, “Yeah, more than ever.”

Williams wore an NYPD hat and a thin blue line tie along with his suit while meeting the president, and Bentley wore a red tie.

The non-profit group Holiday for Heroes announced that they would award the two students with scholarships.

When President Trump asked them how their football team was doing, the replied shortly, “Could be better.”

“You know what? You’re doing great. And everybody out here loves you and appreciates you,” Trump said as the crowd cheered wildly and chanted “U-S-A!”