House Speaker Nancy Pelosi left some viewers scratching their heads after what seemed like a brief communication issue during a Sunday morning news show.

During an interview on ABC News’ “This Week,” Pelosi, D-Calif., was asked whether she and House Democrats would move to impeach President Trump in an effort to stop his U.S. Supreme Court pick from being confirmed to the bench — following the death of Supreme Court Justice Ruth Bader Ginsburg.

“We have our options. We have arrows in our quiver that I’m not about to discuss right now, but the fact is we have a big challenge in our country,” Pelosi said. “This president has threatened to not even accept the results of the election.” 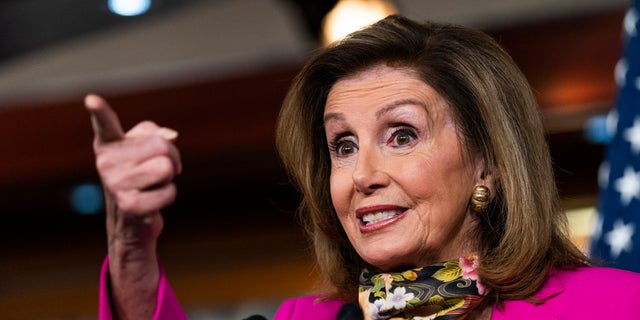 When asked for clarification by host George Stephanopoulos on whether she would take any arrows out of her quiver or rule anything out, her answer seemed disjointed.

Users on social media reacted to her apparent flub, with some wishing they could use that response to get out of an argument or harsh questioning.

“LIFEHACK: If you are in the middle of a harsh questioning and don’t know an answer just respond with “good morning.” It will confuse all parties involved to the point where they just move on. Works every time,” one user wrote.

GINSBURG’S LAST WISH WAS TO ‘NOT BE REPLACED UNTIL A NEW PRESIDENT IS INSTALLED’: REPORT

After her response and a short pause, Pelosi added: “We take an oath to protect and defend the Constitution of the United States. We have a responsibility to meet the needs of the American people.”

“When we weigh the equities of protecting our democracy, it requires us to use every arrow in our quiver,” she continued.

Just hours after it was announced that Ginsburg had passed away on Friday, Senate Majority Leader Mitch McConnell, R-Ky., vowed that a Trump nominee to the Supreme Court to fill her vacancy “will receive a vote on the floor of the United States Senate.”

According to NPR, Ginsburg’s last wish was to not be replaced until a new president was sworn into office.

“My most fervent wish is that I will not be replaced until a new president is installed,” Ginsburg told her granddaughter just days before her death, the media organization reported.