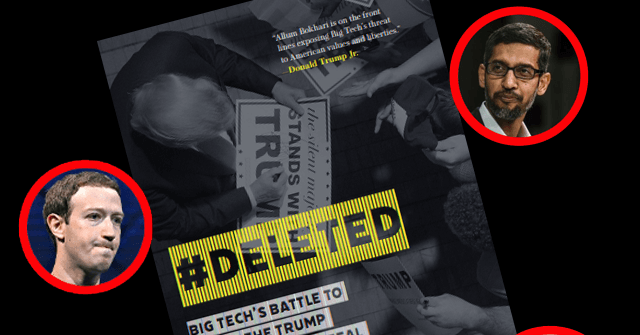 Breitbart Tech reporter Allum Bokhari’s book, #DELETED: Big Tech’s Battle to Erase the Trump Movement and Steal the Election hits bookshelves today. Bokhari has broken numerous stories about the Big Tech Masters of the Universe for Breitbart News, so we’ve gathered together four of the most important.

#DELETED is the product of Bokhari’s years of investigations into Silicon Valley tech giants, and contains numerous interviews with insiders from Google, Facebook, Twitter, and other tech companies.

A source close to Google who was interviewed for the book says it will “shake the foundations of Silicon Valley.”

This isn’t the first time that Breitbart’s Bokhari has exposed Big Tech. Through his network of sources and whistleblowers in Silicon Valley, he’s been responsible for some of the biggest bombshells in tech journalism.

Here are just a few:

The Google Tape is a one-hour recording of an all-hands meeting held at Google shortly after the 2016 elections. Present at the meeting were Sergey Brin, Larry Page, Sundar Pichai, and numerous other members of Google’s leadership team. They all expressed universal dismay at the election of Donald Trump, with co-founder Brin calling the result “deeply offensive.” Other Google executives discussed the need to make the populist movement a “blip” or “hiccup” in history, while others broke down in tears and joked about moving to Canada. At one point, Brin compares Trump voters to “extremists” like fascists and communists, and others discuss using the “Jigsaw” program – designed to counter Islamic extremists – in the context of the Trump movement.

An 85-page briefing prepared for Google’s eyes only, “The Good Censor” openly admits that Google and other Silicon Valley companies censored the internet after the 2016 election, something that the company has long denied in public. In addition to labeling President Trump a “conspiracy theorist,” the document calls the ideal of unfettered free speech on the internet a “utopian narrative” that has been “undermined” by recent global events. The document bemoans that the free and open internet allows “crummy politicians to expand their influence,” and that “racists, misogynists, and oppressors” are allowed a voice alongside “revolutionaries, whistleblowers, and campaigners.”

Did you know that Facebook keeps tabs on prominent political individuals, monitoring both their online and offline behavior for signs of “hate”? You do now, because Bokhari exposed just such an initiative in 2019. He obtained and published an internal document called the “hate agents review list,” featuring a breadth of prominent political figures including Candace Owens, Brigitte Gabriel, Carl Benjamin, Paul Joseph Watson, and even a former Australian senator, Fraser Anning. Next to each of their names, Facebook logged examples of “hate” — enough strikes, and the figures would be banned.

The YouTube search blacklist was so egregious that one Google employee referred to it as a “smoking gun” proving political bias. The Google-owned video platform was revealed to have altered search results for “abortion,” “Federal Reserve,” “Maxine Waters,” “David Hogg” and a multitude of other political search terms. Some of these alterations were made in response to complaints from left-wing journalists. The existence of the blacklist was particularly revealing because Google CEO Sundar Pichai had previously assured Congress that the company does not “manually intervene” in any particular search result. In the assessment of one former Google software engineer, Pichai lied to Congress.

#DELETED: Big Tech’s Battle to Erase the Trump Movement and Steal The Election is currently available for purchase in hardcover, digital, and audiobook formats.