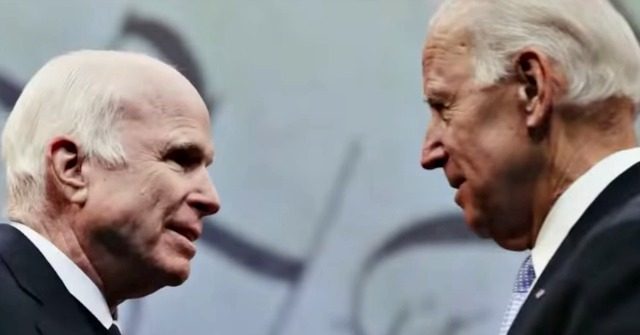 Joe Biden (D) announced on Tuesday that he has earned the backing of Cindy McCain, who is expected to formalize the endorsement on Wednesday.

According to a pool report, Biden announced that McCain, a longtime family friend, has endorsed his candidacy “because of what [Trump] talks about with my son and John’s who are heroes, who served their country. You know he said they’re losers, they’re suckers,” he said, citing the controversial and uncorroborated story from the Atlantic:

NEW: @JoeBiden says during a fundraiser @CindyMcCain is endorsing him for president “because of what [Trump] talks about with my son & John’s who are heroes, who served their country, you know he said they’re losers, they’re suckers.”

How the best @JoeBiden lines begin: “Maybe I shouldn’t say it …”

Per pooler @Emilylgoodin, Biden told donors he was “about to go on one of these Zooms with John McCain’s wife, who is first time ever is endorsing me.”

I’m told that Cindy McCain will be appearing on all three morning shows (CBS, NBC, ABC) tomorrow to formalize her endorsement of Joe Biden.

Biden just confirmed at a fundraiser that she’ll be endorsing him.

During a speech Monday in Manitowoc, Wisconsin, Biden falsely claimed that the Atlantic story, which cited anonymous sources alleging that President Trump called veterans “losers” and “suckers, had been “confirmed by every outlet.”

No one else has corroborated the Atlantic‘s claim. Even Fox News’ Jennifer Griffin, who claimed that she had “confirmed” other details in the story (from two similarly anonymous sources), could not confirm the Atlantic‘s “suckers” and “losers” claim.

Moreover, more a dozen current and former Trump administration officials have publicly and demonstratively denied the claims in the Atlantic article — including former National Security Adviser John Bolton, who has become a Trump critic.

McCain’s endorsement does not necessarily come as a shock, as she participated in the Democratic National Convention, describing the friendship her late-husband John McCain forged with Biden:

However, her endorsement stands in contrast to the position she held in April 2019. At the time, she said she had “no intention of getting involved in presidential politics”:

Joe Biden is a wonderful man and dear friend of the McCain Family. However, I have no intention of getting involved in presidential politics.

Meghan McCain has also indicated that Biden has her full support.

“I just had a really long conversation with him a few days ago, like on Saturday. I love him, dearly. I keep telling everyone I will promise you will know who I’m voting for,” The View co-host said in an April appearance on Bravo’s Watch What Happens Live.