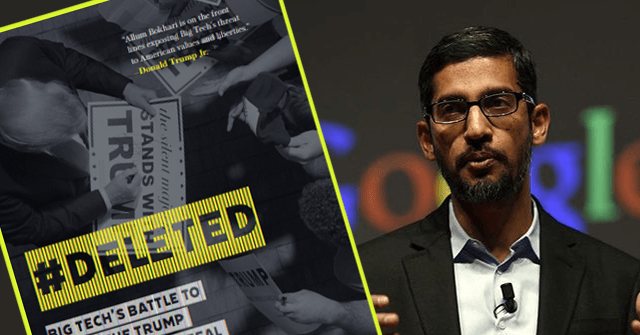 “When voters find out what big tech companies have done to meddle in the coming election, they’ll be rightly furious” said a Google whistleblower interviewed for the book.

#DELETED can be ordered online from Amazon, Barnes & Noble, and other retailers. It is available in hardcover, digital, and audiobook formats.

Bokhari, author of #DELETED, has spent four years developing a network of whistleblowers in Silicon Valley. In the book, these sources tell the inside story of how the most powerful information technologies ever devised have been weaponized against President Trump and his movement.

Through this network of sources, Bokhari has already published a number of explosive stories exposing Big Tech’s rampant anti-conservative bias, including:

“As editor of Breitbart News, I like scoops, but I love scoops that hold the most powerful people on Earth accountable, and that’s what Allum Bokhari does better than anyone in tech journalism,” said Alex Marlow, editor-in-chief of Breitbart News.

“#DELETED is the book the Silicon Valley Masters of the Universe don’t want you read because Allum clearly explains why they pose a dire threat to the republic. This is essential reading on arguably the biggest issue of our time,” added Marlow.

Many conservatives are already aware of the overt censorship — prominent conservatives getting banned by social media platforms, and the President himself having his posts hidden by Twitter.

Less well-known is the covert censorship — subtle tweaks to artificial intelligence algorithms that can suppress entire political movements without them realizing.

Bokhari reports that everything you post online will be scanned (and potentially suppressed) by “hate speech algorithms,” whether you’re aware of it or not.

The book also reveals how elites in progressive advocacy organizations and the media aligned with Big Tech’s most radical employees to push for the censorship of social media platforms, effectively ending an era of unprecedented internet freedom.

#DELETED is released today, and can be purchased at Amazon, Barnes & Noble, and a number of other retailers.