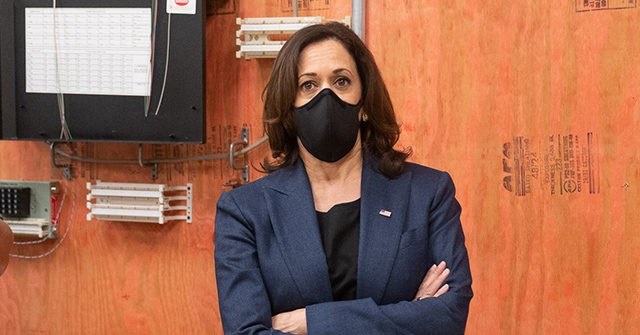 Sen. Kamala Harris (D-CA), who last week surveyed wildfire damage in her state of California, has primarily focused on climate change in the wake of the devastation across her state.

Notably, few of the measures she sponsored or co-sponsored — if any at all — have had a meaningful impact on the Californians facing the wildfires dominating the west, some of which were magnified by arsonists — another fact the senator has largely left unaddressed. Instead, she has continued to direct the bulk of her attention to climate change, alongside her radical left-wing colleagues, many of whom are also using the devastation to push for a Green New Deal:

It’s time for new leadership in our country. If we are elected, @JoeBiden and I will take seriously the changes in our climate and actively work to mitigate against the damage. It can’t wait.https://t.co/VeCSfhxVJQ

Earlier this month, Harris surveyed the damage in Fresno County alongside Gov. Gavin Newsom (D), who praised the Democrat presidential nominee, because she “gets it.”

“If you don’t believe in science, come to California and observe it with your own eyes,” Newsom said. “You cannot be in denial about this reality.”

Harris called the wildfires and devastation “utterly predictable,” although she was not referring to the reality of wildfire season, which has existed for centuries, nor the environmental policies that have, critics say, enhanced the devastation — such as pursuing “fire suppression” rather than prescribed burns.

“Sadly, these wildfires and the devastation they cause are utterly predictable,” Harris said. “This is not a partisan issue. This is just a fact. We have to do better as a country.”

“We have to understand that California, like so many other parts of our country, has experienced extreme weather conditions,” she continued. “It is incumbent on us, in terms of the leadership of our nation, to take seriously these new changes in our climate, and to do what we can to mitigate against the damage.”

Following Harris’s visit — which was her first public stop in the Golden State as Biden’s running mate — a California family accused Harris of using their burnt home for a photo op. One of the family members said Harris had not reached out to assist the family:

However, a brief look at Harris’s recent history as a lawmaker shows that she has done very little to address wildfire season in her state in an impactful way.

Most recently, Harris sponsored the Climate Equity Act alongside radical Green New Deal champion Rep. Alexandria Ocasio-Cortez (D-NY). According to a press release, the legislation is meant to “ensure that the United States government centers communities on the frontlines of the climate crisis in policy related to climate and the environment.” It defines frontline communities as “those that have experienced systemic socioeconomic disparities, environmental racism, and other forms of injustice, including low-income communities, indigenous peoples, and communities of color.” It specifically requires future legislation to “receive an equity score that is both quantitative and qualitative to estimate the impact on frontline communities” and would also:

Nothing in the legislation addresses issues directly related to forest management — a key factor in addressing wildfires in the modern era, some experts say.

Regarding the legislation, Harris stated:

COVID-19 has laid bare the realities of systemic racial, health, economic, and environmental injustices that persist in our country. The environment we live in cannot be disentangled from the rest of our lives, and it is more important than ever that we work toward a more just and equitable future. That is why, as we combat the climate crisis and build a clean economy; we must put justice and equity first. I’m proud to partner with Congresswoman Ocasio-Cortez on this comprehensive proposal to empower communities that have been neglected by policymakers for far too long.

In July, she introduced the Environmental Justice for All Act, which focuses primarily on “environmental justice” and “systemic racism.”

A release detailing the measure stated:

All people have the right to clean air, clean water, and a healthy environment. But for too many, these rights are still unrealized. That injustice, and the cumulative injustices of housing, economic, education, and health care injustice, and others, mean that millions in America have been ignored by our government for generations.

The release added that the measure “establishes programs to ensure more equitable access to parks and the outdoors … funds programs to study potentially harmful products marketed towards women and girls of color,” and “requires early and meaningful involvement in actions impacting communities, including Tribes.”

Other measures Harris has sponsored or cosponsored in the last three years include:

While she cosponsored the Smoke Planning and Research Act of 2019, it “requires the Environmental Protection Agency (EPA) to research and mitigate the impacts of smoke emissions from wildland fires,” according to a summary of the bill. She also introduced the Wildfire Defense Act last year, which would invest $1 billion per year to:

Establish guidelines for communities to conceptualize new Community Wildfire Defense Plans (CWDP) that are developed in coordination with community members, first responders, and relevant state agencies. CWDPs will focus on implementing strategies and activities relating to:

“We cannot stop the threat of wildfires entirely, but we can do much more to prepare our communities for worst-case scenarios while working to address the structural issues that have caused these fires to burn more quickly and more intensely than ever before,” a release stated.

Overall, Harris has appeared to focus her attention on sounding the alarm on climate change and environmental justice rather than proposing direct action to mitigate the wildfires in her state. The senator’s office did not respond to Breitbart News’s request for comment.

If you give a climate arsonist four more years in the White House, why would anyone be surprised if more of America is ablaze? pic.twitter.com/DwCIoNkwk1

At least four individuals, including one who attended anti-police protests in Seattle, have been arrested for arson in the west.

President Trump spoke on the issue in 2018, stating plainly that the state needs forest management.

“You need forest management. It has to be,” Trump said. “I’m not saying that in a negative way, a positive — I’m just saying the facts.”

As Breitbart News reported, the United States Forest Service and Democrat Gov. Gavin Newsom “have reached agreement on a $1 billion plan to clear vegetation that fuels fires on one million acres annually by 2025, with a plan on how to do that in place in 2021.”

According to the National Interagency Fire Center, California is currently reporting 22 large fires.