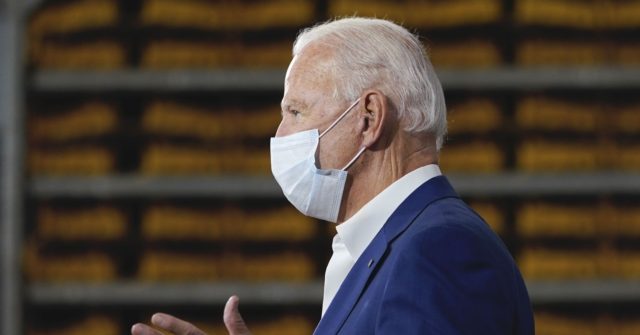 President Donald Trump on Tuesday ridiculed former Vice President Joe Biden for wearing a mask all the time, even when he was far away from other people.

“Honestly, what the hell did he spend all that money on the plastic surgery if he’s going to cover it up with a mask?” Trump asked during a rally with supporters in Moon Township, Pennsylvania.

Cosmetic surgeons estimate that Biden had a facelift before he launched his 2020 presidential campaign, tightening the wrinkles out of his face.

The president predicted that Biden would likely arrive at next week’s presidential debate wearing a mask.

“I’ll be honest, he feels good about the mask. I think he’ll come in with a mask,” Trump said. “The question is, will he leave it on during the debate?”

The president said he was “all for masks when you need them” but questioned whether a mask was needed when he was on a stage far away from other people.

Biden frequently appears on camera wearing a mask, and then slowly removes it to demonstrate the importance of wearing masks to slow the spread of the coronavirus. On Monday, Biden even wore a mask for a remote interview with a local Wisconsin TV station.

“He had a habit of taking it off and it hangs down on his ear as he’s speaking,” Trump recalled. “It makes him feel comfortable, and honestly  –whatever makes you feel good is ok with me.”