Iran’s president delivered a fiery speech before the U.N. on Tuesday in which he compared the killing of George Floyd in Minneapolis to the treatment his country receives from the U.S.

“We instantly recognize the feet kneeling on the neck (of George Floyd) as the feet of arrogance on the neck of independent nations,” Iranian President Hassan Rouhani said in pre-recorded remarks. “The footage broadcast to the world concerning the treatment of an African American by the U.S. police is reminiscent of our own experience.” 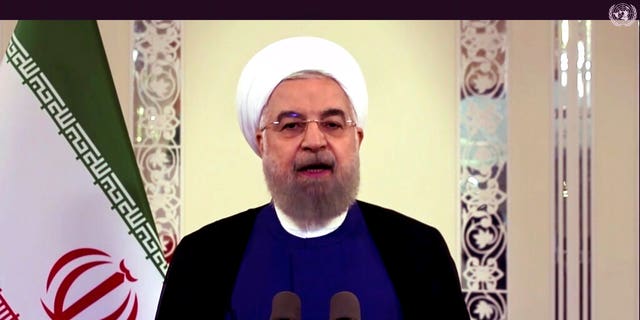 In this image made from UNTV video, Iranian President Hassan Rouhani speaks in a pre-recorded message which was played during the 75th session of the United Nations General Assembly, Tuesday, Sept. 22, 2020, at UN headquarters in New York.  (UNTV via AP)

Floyd, a Black man, died after a white Minneapolis police officer knelt on his neck for nearly nine minutes. The death on May 25 sparked a wave of global protests against police brutality and racial injustice.

Like Floyd, and more generally the African American population in the U.S., Rouhani said that “the valiant Iranian nation has paid a similar high price for its quest for freedom and liberation from domination and despotism.”

US NAVY CARRIERS STEAM NEAR IRANIAN COAST IN SHOW OF POWER

Iran and the United States have been at odds for decades after Iran’s 1979 Islamic Revolution and the ensuing taking of American hostages in Tehran for more than a year.

Tensions between Tehran and Washington reached all-time highs after President Trump unilaterally withdrew the U.S. from a nuclear deal with Iran and other world powers that was brokered during the Obama administration.