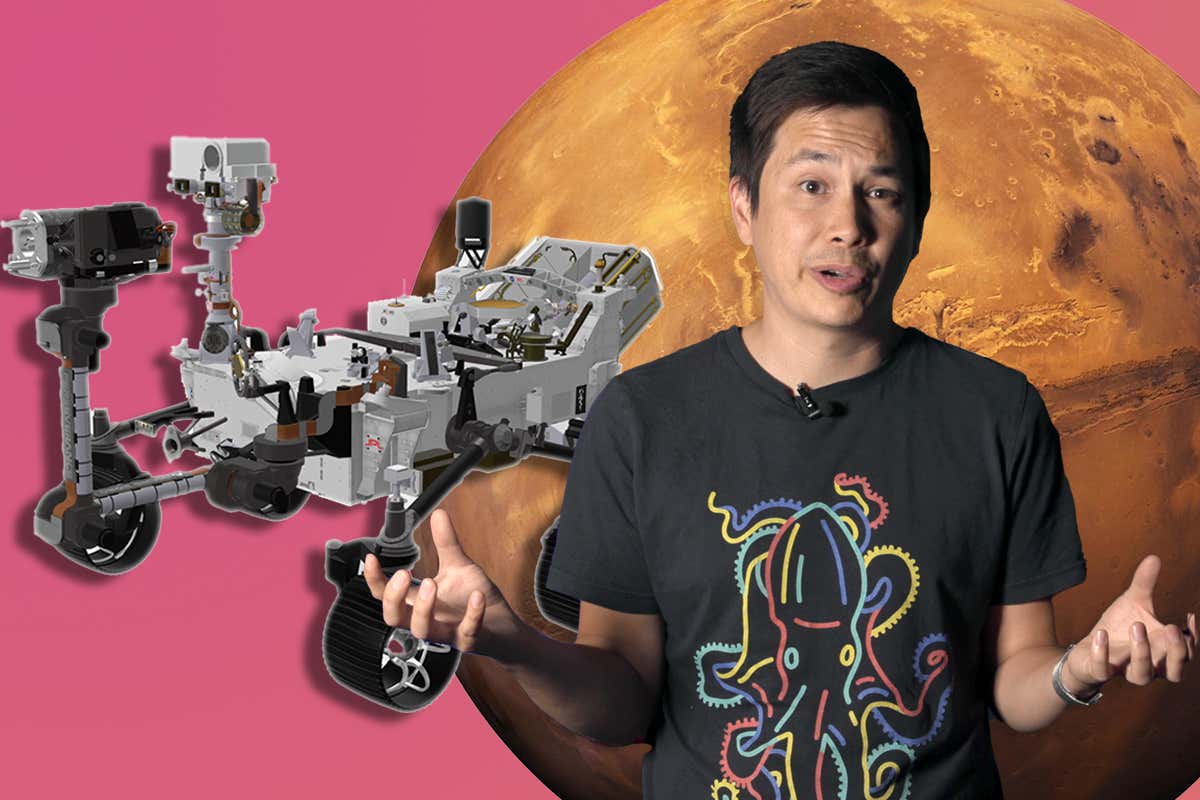 NASA’s fifth Mars rover, named Perseverance, launched in July 2020, and is the first Mars rover tasked with searching for life itself. Thanks to earlier missions, we now know that liquid water was once abundant on the surface of Mars. In this instalment of our video series Science with Sam, you will find out how the rover will hunt for evidence of life, see how scientists will attempt to launch a helicopter on another planet for the first time, and learn how Perseverance will test the technology for making oxygen on Mars in preparation for future human exploration.

Tune in every week to youtube.com/newscientist for a new episode, or check back to newscientist.com

More about Science with Sam

NASA’s latest rover is on its way to Mars. Its mission: to look for signs of ancient life.

Perseverance will push forward the boundaries of a decades-long investigation into whether Mars has ever hosted life at any point in its 4.5 billion year history. On board is a suite of sophisticated scientific instruments designed to hunt for the signs of ancient life. It will also start to investigate how humans might live there, and, for the first time ever, we’ll see if we can fly a helicopter on another world.

Its predecessors investigated whether Mars had habitable conditions, particularly looking for evidence of liquid water. Together with observations from Mars orbiters, they gathered evidence that Mars once had large oceans, lakes and rivers. They even found hints that water still flows on Mars even today, although some features that were originally interpreted as streaks of flowing water might actually be just sand.

We now know that Mars has the ingredients for life, and it may have been much warmer in the past. Perseverance will the first rover to explicitly look for signs of life itself.

The chances of finding current life on Mars are pretty slim. But in the distant past, it’s not so far-fetched, and finding it would be a huge deal. Right now, Earth is the only place we know of where life has ever existed. If we were to find evidence of living organisms on our nearest neighbour, it would tell us that our home is not unique, and maybe life elsewhere in the universe is actually quite common.

Perseverance will reach Mars in February 2021. The launch was timed so that the positions of Earth and Mars would make the journey as quick as possible, giving a flight time of about 7 months.

The landing site is Jezero crater, which is believed to be the best candidate for finding life on Mars. Water and sediments collected in this former lake bed, and it’s here that scientists hope to find ancient organic molecules and signs of microbial life.

To do that, the rover is carrying a set of high-tech gadgets that would put James Bond’s Aston Martin to shame. There’s a nuclear generator, a computer, an identical backup computer, six-wheel drive, a triple-jointed robotic arm, a drill, a weather station, and microphones, so we’ll get to hear Mars for the first time.

One key bit of kit to identify signs of life is called SHERLOC. That’s a contrived acronym with lots of jargony words, but what it does is shine a laser at rocks and measures the spectrum they reflect to determine their chemical composition. It even has a sidekick – a camera called WATSON.

But Perseverance isn’t just taking pictures. The rover will collect bits of Martian rock in tubes to be collected by a future mission. Hopefully we could have those tubes back on Earth to study by 2031, which would get scientists really excited.

To keep up to date with what’s going on in the world of space exploration, subscribe to New Scientist. We’ve got a 20 per cent discount for our Youtube viewers. Click on the link and enter SAM20 at checkout. And if you want to have a closer look at the amazing astrophotography images behind me, do a search for Astronomy Photographer of the Year, here at the National Maritime Museum in London.

On top of the hunt for life, Perseverance is going to attempt something extraordinary. Mars is about to get its first helicopter.

Ingenuity is a “Wright Brothers moment on another planet”, according to lead engineer MiMi Aung. If all goes to plan, just 118 years after the Wright Flyer took off in North Carolina, a 1.8 kilogram helicopter will take off on Mars.

To complete its mission, all it has to do is get off the ground. Later missions could include bigger helicopters and maybe even planes that can fly further around the planet.

Because Mars’ atmosphere is so thin, that mission isn’t so easy. Its super-light carbon fibre blades have to spin at 2400 revolutions per minute – about seven times faster than a typical helicopter on Earth.

Another exciting experiment on board Perseverance will see if it’s possible to produce small amounts of oxygen on Mars. That’s going to be absolutely crucial when we eventually send huhmans there. Not only will they need oxygen to breathe – they also need it to burn fuel and launch rockets back to Earth. Mars has only trace amounts of free oxygen in its atmosphere, but it has plenty of oxygen bonded with carbon atoms in the form of carbon dioxide.

This experiment, called MOXIE, will test the technology for making oxygen from carbon dioxide on Mars. MOXIE inhales small amounts of carbon dioxide from Martian air, pressurises it and heats it to 800 degrees. A combination of heat and electricity rip an oxygen atom off each carbon dioxide molecule, producing carbon monoxide and oxygen.

MOXIE is expected to produce 10 grams of oxygen in an hour – barely enough to breathe for 15 minutes. But MOXIE is just a test. MOXIE is about the size of a car battery.  For a human mission to Mars, we would need something about 100 times bigger. And If we want to launch a rocket home, we’ll need about 30 to 45 metric tonnes of oxygen, more if we were to ever settle there.

Mars is not exactly the most hospitable place to settle down, but some people, including SpaceX boss Elon Musk, are really keen on the idea.

Elon Musk: “Do you want the future where we become a space-ranked civilisation and are in many worlds and out there among the stars, or one where we are forever confined to Earth? I say it is the first.”

Perseverance is taking some of the first steps to see if that’s possible.

So we’re going to learn a lot from this mission. We’ll see if it’s possible to fly a helicopter on another planet. We’ll prepare for future human exploration. And just maybe, we’ll find signs of ancient life on another planet.

More on these topics: