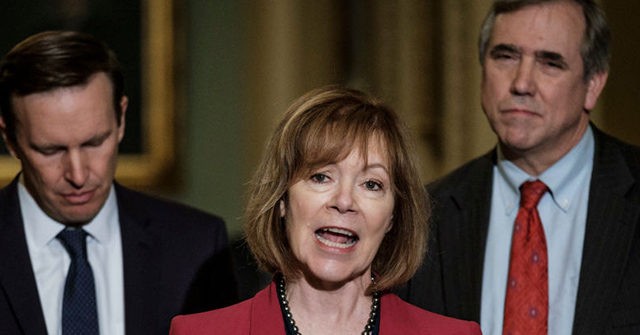 Sen. Tina Smith (D-MN) took to Twitter on Monday to tout her past work for Planned Parenthood as she faces a tough reelection bid.

“I’m the only Senator to have worked at Planned Parenthood,” tweeted Smith, a former executive for Planned Parenthood of Minnesota and North and South Dakota. “I’ve seen first-hand how far Republican attacks on reproductive rights will go. If they get this SCOTUS seat, they WILL work to overturn Roe v. Wade.”

Smith’s pro-life Republican challenger, Jason Lewis, responded that Smith “made a career and fortune taking the lives of the unborn and she’s wearing it as a badge of honor. It’s disgraceful.”

“She also said on the Senate floor that providing medical treatment to a newborn who survives a botched abortion attempt would be ‘inappropriate,’” Lewis added.

Senator @TinaSmithMN made a career & fortune taking the lives of the unborn & she’s wearing it as a badge of honor. It’s disgraceful.

She also said on the Senate floor that providing medical treatment to a newborn who survives a botched abortion attempt would be “inappropriate.” https://t.co/giR4HnI3QI

Since Sen. Smith worked at Planned Parenthood, she knows full well how they treat women, how they tell vulnerable women there is no way they can have a baby and achieve their dreams, how they push their clinics to meet abortion quotas, how they have clinic workers who piece together the pieces of aborted babies daily. I know how easy it is to justify the lies Planned Parenthood tells and to think that you are helping women who walk through those doors. And I’ve got more than 550 former abortion workers who testify to this truth that I’ve helped leave abortion clinics. Planned Parenthood does the very opposite of empowering women and unfortunately I participated in those lies for eight years. It’s never too late to see the truth and experience the mercy of God, which is there for everyone, including Sen. Smith.

Johnson’s address at the Republican National Convention in August described the violence of abortion and the stark choice facing Americans in the upcoming election.

As the Minnesota Sun reported, Smith, who also spent years as a lobbyist for the abortion industry fighting against pro-life legislation, said on the Senate floor in February 2019 that medical treatment for babies who survive botched abortions was “inappropriate”:

Colleagues, that’s what this bill does. It would give the politicians in this room the power to make medical decisions for women and their families. This bill intimidates providers and forces physicians to provide inappropriate medical treatment, even when it’s not in the best interest of the patient or her family.

Recent polling shows the race between Smith and Lewis to be statistically tied.

President Donald Trump has said he will announce his nominee for the U.S. Supreme Court vacancy on Saturday.

“The heated politics of the U.S. Supreme Court vacancy are spilling into Minnesota’s Senate race, with U.S. Sen. Tina Smith and Republican challenger Jason Lewis pressing opposite views on an issue that could reframe the presidential election,” the Star Tribune observed this week.