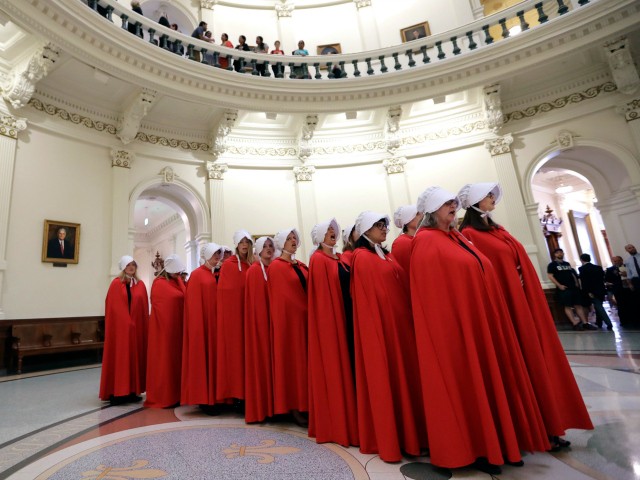 The far-left Newsweek just fired off around a thousand words falsely accusing Amy Coney Barrett of inspiring the dystopian feminist thriller The Handmaid’s Tale, and has been forced to retract it.

Of course, the fake news outlet didn’t retract-retract it. That would require ethics and integrity, and anyone in the media who engages in ethics and integrity will be booted from the club, so Newsweek just wrote the equivalent of “nevermind” at the bottom of its big lie and rewrote the big lie a bit.

Brace yourselves… These corrupt bastards are just getting started.

Since the fake news media cannot falsely accuse a female Supreme Court nominee of rape, like they did Brett Kavanaugh, and since President Donald Trump is almost certainly going to nominate woman to replace the late Justice Ruth Bader Ginsburg, the fake media are going to have to get creative…

And what I mean by “creative” is dishonest, desperate, evil, and stupid.

Case in point, the former news outlet known as Newsweek that just stepped on the first of what will be many rakes stepped on by the fake media in the coming weeks.

We know that was the original headline because the godless hacks at Newsweek have not retracted the tweets with that lie.

The original story, which is still published at the far-left MSN (I don’t link fake news), read like this [emphasis original throughout]:

And then there’s this:

How People of Praise inspired ‘The Handmaid’s Tale’

Members of People of Praise are assigned to personal advisers of the same sex—called a “head” for men and “handmaid” for women, until the rise in popularity of Atwood’s novel and the television series based on it forced a change in the latter.

Atwood herself has indicated that the group’s existence motivated her to write The Handmaid’s Tale, set in the fictional Gilead, where women’s bodies are governed and treated as the property of the state under a theocratic regime.

And on and on it went.

None of it is true.

No group affiliated with Coney Barrett inspired The Handmaid’s Tale. Didn’t happen. Never happened. It was all a lie.

So now, way at the bottom of the rewritten Newsweek piece (I don’t link fake news), we get the retraction, the pathetic nevermind:

Correction: This article’s headline originally stated that People of Praise inspired ‘The Handmaid’s Tale’. The book’s author, Margaret Atwood, has never specifically mentioned the group as being the inspiration for her work. A New Yorker profile of the author from 2017 mentions a newspaper clipping as part of her research for the book of a different charismatic Catholic group, People of Hope. Newsweek regrets the error.

So Newsweek premised an entire piece based on the idea that a group affiliated with Coney Barrett inspired The Handmaid’s Tale.

The Newsweek piece was so strongly premised on this idea, the original headline came right out and said, “How Amy Coney Barrett’s People of Praise Group Inspired ‘The Handmaid’s Tale.’”

And then, Newsweek found out that this group affiliated with Coney Barrett had absolutely nothing to do with inspiring The Handmaid Tale, but…

The smear is still published without a correction at MSN, and…

The smear is still published at Newsweek with the equivalent of a retraction buried at the bottom.

Oh, sure, the former news outlet known as Newsweek did change the headline of it smear to “How Charismatic Catholic Groups Like Amy Coney Barrett’s People of Praise Inspired ‘The Handmaid’s Tale,”‘ and changed the opening paragraph to this…

Amy Coney Barrett, a favorite to be President Donald Trump’s Supreme Court nominee to replace Justice Ruth Bader Ginsburg, is affiliated with a type of Christian religious group that served as inspiration for Margaret Atwood’s dystopian novel, The Handmaid’s Tale.

…which only proves Newsweek is a mob of obscene liars and character assassins who know that if they did the correct thing, who know if they removed the piece with an apology, the rest of the fake media would never forgive them.

Pray for whoever Trump nominates later this week.

If it’s a man, you can be damn sure CNN and NBC and the Washington Post and New York Times already have fake rape victims warming up their lies and little girl voices and wild tales about extra front doors and a fear of flying.

If it’s a woman, by the times these demons are done, whoever she is will be reduced to CrazyStupidRacistGrifterBigotExtremistFreak.