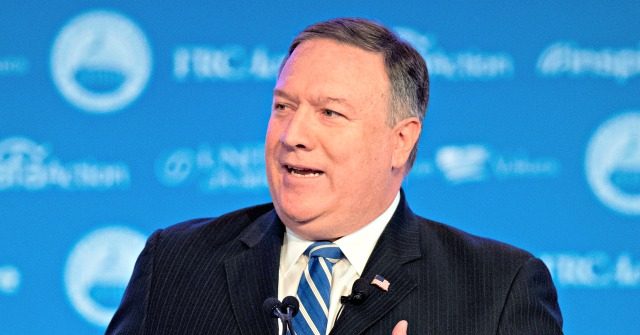 U.S. Secretary of State Mike Pompeo blasted the atheist communist party in China during the virtual Values Voter Summit 2020 on Tuesday for persecuting Christians and trying to rewrite the Bible to adapt the Christian doctrine to Chinese society.

“We watch today the challenge that Christians and Catholics have to practice their faith inside of China,” Pompeo proclaimed at the virtual conference, echoing annual International Religious Freedom Reports issued by the State Department.

“The Chinese Communist Party is trying to rewrite the Bible itself to ‘sinicize’ the Christian doctrine,” he added, consistent with independent assessments. “That’s unacceptable. That will diminish the Chinese people. We want good things for them.”

Chinese dictator Xi Jinping has made it clear that the Chinese Communist Party (CCP) wants to “sinicize” all religions — ensure that they assimilate into traditions and doctrine that better conform with Chinese society and CCP objectives.

Referring to “sinicization,” the Diplomat reported in June 2018:

This has been a primary focus of Xi’s religious policies since his April 2016 speech at the National Religious Work Conference, in which he asserted that in order to “actively guide the adaptation of religions to socialist society, an important task is supporting China’s religions’ persistence in the direction of sinicization.”

During the virtual conference, Pompeo stressed that authoritarianism thrives in the absence of religious freedom.

“I believe, President Trump believes, that absent religious freedom, the lives of people around the world are very difficult,” he noted. “Authoritarianism almost always follows the oppression of religion. Pushing religion out of the public square drives oppression, drives authoritarianism,

That is why the Trump administration has made it a top priority to promote religious freedom across the world, Pompeo said.

He also lambasted China for “trying to eliminate anyone who is not Han Chinese” in Muslim-majority Xinjiang province.

In Xinjiang, the communist party is imprisoning Muslims in concentration camps, dubbed vocational centers by Beijing.

The U.S. State Department has acknowledged that China is subjecting Christians, Muslims, and other religious groups to “transformation through re-education” at the camps.

China forces the camp prisoners to listen to propaganda and subjects them to intensive monitoring outside the facilities, all intended to ensure the worshippers remain loyal to the Communist Party.

According to Pompeo, the United States must ensure that China does not trample on religious freedom and human rights.

The Chinese Communist Party is seeking hegemony across the world, and we have an obligation to do our best to make sure that the freedoms that we value and the capacity to exercise our human rights aren’t trampled upon by whether that’s their predatory economic activity or their military might or their misinformation campaigns here in the U.S.

“We work hard to make sure that we maximize religious freedom for every human being all across the world,” he added.