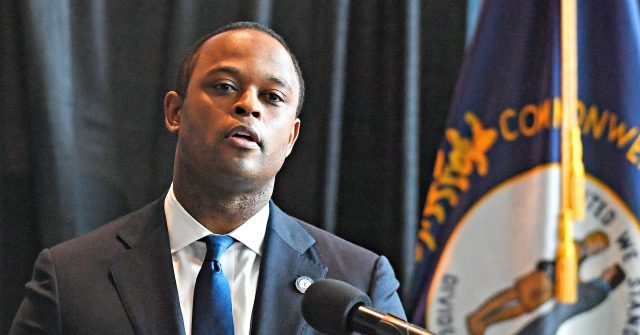 Kentucky Attorney General Daniel Cameron responded to a reporter’s question about race during a press conference on Wednesday to announce that the Grand Jury would indict one officer for wanton endangerment during a search warrant execution that led to the death of Breonna Taylor when three officers entered her apartment in March.

Taylor, 26, an emergency medical technician, was killed in the crossfire when her boyfriend opened fire at police, thinking they were intruders. A grand jury indicted Detective Brett Hankison. The two other officers involved, Sgt. Jonathan Mattingly and Detective Myles Cosgrove, were not charged.

An unidentified reporter asked: “What do you say to people who say this is just another example of the black community not getting full justice. What specifically do you plan to do to calm a community that’s long been hurting and do you understand that [sic] angry that people might feel.”

“I certainly understand the pain that has been brought about by the tragic loss of Miss Taylor,” Cameron said. “I understand that as an attorney general who is responsible for all 120 counties in terms of being chief legal officer, chief law enforcement officer.”

“I understand that,” Cameron said. “I understand that as a black man how painful this is. Which is why it as so incredibly important to make sure we did everything that we possibly could to uncover every fact.”

You bet. Wonderful answer to the moronic question about the racial makeup of the team. “Well, I’m black, and I speak for the department. I hope that answers that question”. OUTSTANDING.

“My heart breaks for the loss of Miss Taylor,” Cameron said.

“My mother, if something was to happen to me,” Cameron said fighting back emotions, “would find it very hard.”

Cameron also announced at the press conference that the search at Taylor’s apartment was not a no-knock search and that the officers knocked and announced their presence before entering the residence.